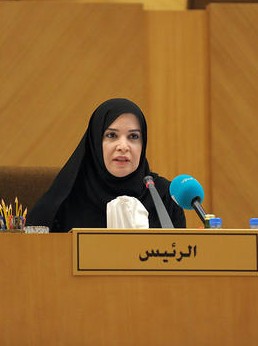 Al-Qubaisi presides over a council with an advisory nature, but the UAE government plans to gradually expand its functions

The exclusion of women’s participation in political line in the Gulf is deliberate.

Appointing Dr. Amal Abdullah Al Qubaisi, as a chairman of the Federal National Council in the United Arab Emirates was hailed as a sign of positive progress by Arab elites, especially women.

Being the chairman of the Federal National Council of the UAE must shed upon us some light regarding the empowerment of women; that is, it’s important to realize that it was not by appointment as we would normally witness in many Gulf and Arab states in order to attempt to raise women’s quota, enabling them politically in the legislative or municipal councils.

Amal Al Qubaisi was able to reach this position through the ballot box, which reflects the confidence of voters and the change of their perception toward women and their ability to participate actively and effectively in decision-making positions.

Today, Al-Qubaisi is an elected female president, and this is the heart of the matter. She is a president of a council that includes forty members; half of them are elected by direct voting while the rest are appointed by the rulers of the seven Emirates States.

To add more, the Council includes eight appointed women, in addition to the elected president. The number of voters has reached 224 thousands last October out of nearly a million Emarati. The council with an advisory nature, but the UAE government plans to gradually expand its functions.

Being in charge of such position brings us to reflect on the experience of the political empowerment of UAE women compared with those of other GCC countries. It has been indicated in some reports that the UAE’s experience is not new and has ancient roots. In 1973, Aisha was chosen for the post of a deputy minister as a first step towards the inclusion of women in political life gesture. In 2004, a decision had been made to appoint the first female minister in the history of the UAE – Sheika Lubna Al Qasimi — Minister of Economy at the time. In 2015, UAE has got for lady ministers; Sheika Lubna Al Qasimi, Minister of Development and International Cooperation; Mariam Al Roumi, Minister of Social Affairs; Maitha Al Shamsi and Reem Al Hashemi. Also, there is Najla Al Awar, Secretary General of the Council of Ministers since March 2006. In the diplomatic field, the UAE has made great strides in terms of empowering women through the appointment of three ambassadors of the state abroad in countries like Sweden, Spain and Montenegro. Adding up, there is also a permanent delegate to the United Nations, in addition to two consulates in Hong Kong and Milan.

This certainly proves that the UAE is moving onward towards the empowerment of women. It is clear that the UAE is far beyond the other Gulf States despites some of those countries were pioneers in the adoption of the notion of making women share a place in the political line and decision-making.

Although we are encouraged by such leaps achieved by the women of UAE, the experiences of neighboring countries make observers pessimistic and do not pin high hopes on this. For example, Kuwait and Bahrain were pioneers in the field of women’s empowerment and involvement in decision-making positions but the sparkle gradually faded and did not achieved the desired results.

No one can deny in any way the extent of progress made by women in the Gulf; generally in the field of education, employment and relatively at the level of freedom even if the percentages vary from country to another. This certainly forced the community to proceed in developmental progress and adopts programs to rise up further.

The presence of women in the Gulf in the political sphere is still limited and modest in spite of the efforts made in this regard, the positive steps cannot be denied, but apparently, the community’s confidence in women is less efficient and weak. Each time the competition heads to the ballot boxes, the results become disappointing, which can be considered the reason of the limited political participation of women.

Women’s participation in decision-making positions is still passed to this day through appointments which is the case in various Gulf countries, of course, there are exceptions like the election of Ms. Amal Al Qubaisi, Chairman of the Board of the Federal. However, in accordance with the ratio system and proportionality, it is still considered an exception compared to the rest of the world and perhaps Arabic countries as well.

Given the reality of women’s participation in political sphere in the Gulf states, it is imperative to acknowledge that this is a deliberate exclusion, which is fueled by community that underestimates the ability of women to make crucial decisions and actively participate in community development processes.

As a result, the empowerment of women still depends on the quota seized by governmental systems, a trend that we cannot deny that its primary goal is to avoid international criticism rather than to believe in the necessity of the actual activation of the role of women in decision-making. Women have proven their efficiency and their ability to withstand these responsibilities whenever given the chance and they have to work toward achieving it.