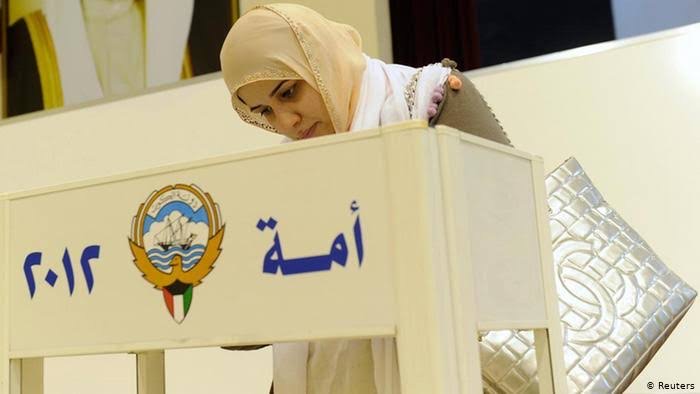 The eighteenth session of the Kuwaiti National Assembly elections is not merely one of bad luck for Kuwaiti women. Rather, we may go so far as to label it the “session of exclusion”. For the coming four years, the Kuwaiti Parliament will be a male-only. The new Kuwaiti parliament, which has undergone a significant change of 62% of its formation and was marked by a noticeable rise in the youth category, has not accommodated any female representative, although many observers see it as a positive change. Nonetheless, the only seat that women were able to secure in the previous session was lost in the current one as none of the 33 female candidates made it to the new formation of the parliament.

It is worth noting, however, that any observer of the history of women’s participation in the Kuwaiti parliamentary elections and the successes they made since 2005, when women were finally allowed to vote and run for elections, must come to the conclusion that the crushing defeat that Kuwaiti women suffered in this session is only an obvious and logical result of the continued retreat and decline of female representation under the dome of ‘Abdullah Al-Salem’.

In the first parliamentary elections that followed the decree allowing women to vote and run for elections, in 2009, four women were able to ascend to parliament and obtain seats—an achievement that many were very pleased with and considered the beginning of the era of female participation in political life. Unfortunately, however, in 2012, the number of women representatives decreased to 3, then to 2 in 2013, and then to one single seat in 2016, and eventually, the Kuwaiti parliament returned to its purely male version in 2020–a scene that takes it back to before 2009.

What is striking about the parliamentary elections in Kuwait is that the exclusion of women from the assembly coincided with an active and remarkable women’s participation in the electoral process; 52% of voters were women.  A big question mark about the insistence of Kuwaiti women on not granting their candidate counterparts this trust. Since their participation, women voters have outnumbered men in the elections.

One cannot overlook the trust crisis toward the importance of women’s role in the parliament and their ability to make a difference. In fact, the crisis goes beyond the tribal nature of the Kuwaiti society that favours men despite the cultural and civilizational development that Kuwaiti society has known.

The one-vote system, which the electoral system in Kuwait adopts, was and remains the main obstacle to Kuwaiti women reaching the desired level in the ‘Abdullah Al-Salem’s hall’. According to this system, the voter has the right to vote for one candidate only in the constituency he is registered. In total, there are 5 constituencies with 10 candidates in each. As such, the choice is always governed by societal, tribal, family, and ideological accounts, which reduces women’s chances of success. This explains the humble female presence under the dome in the previous sessions.

On the other hand, it must be recognized that Kuwaiti women have not yet possessed sufficient political acumen or have not worked to develop their capabilities to enable them to compete with men in the election race.

The feminist struggle in Kuwait is well established, since it dates back to 1962 when the constitution was ratified. Since then, Kuwaiti women have been demanding their civil and political rights until they succeeded in obtaining them in 2005. It seems, nonetheless, that it has not reached a stage of maturity yet. This is evident not only if failure to make it to the parliament in this session but also in their performance in the previous sessions. Indeed, these results were clear indications of a defect that prevents the desired outcomes, especially in the light of the long history of its struggle.

The fact that women MPs had not performed in a way that makes the female presence a necessity cannot be overlooked, especially in a society where male bias is a phenomenon. Had those female MPs left an imprint in the issues discussed, they would have been formidable rivals for men. Even Safaa Al-Hashem, whose constituency renewed their confidence in her for two sessions, could not maintain her seat in the final round. This may indicate the voters’ dissatisfaction with her performance during the last parliamentary session.

It is obvious today that Kuwaiti women are back to square with regard to their representation in the Parliament. In addition, the outcomes of previous electoral elections did not reflect any outstanding performance that would suggest that this setback is nothing but a stumble that could be overcome in future elections.

The malady is visible, and its antidote exists and is in effect in many countries. The United Arab Emirates, for instance, raised the percentage of female representation in the Federal National Council to 50%, which is classified as positive discrimination.  That would guarantee a steady share for women in the Parliament and establish a tradition of continuous female participation in political life.

It is noteworthy that many experiences have confirmed that introducing the ‘quota’ system has yielded effective political participation for women. Therefore, it seems to be the best solution for creating pluralism, especially that previous parliamentary sessions have not brought about major changes in the population’s electoral behaviour, which remains influenced by societal intricacies and impositions.

In addition to the hypothesis of adopting a ‘quota’ system, which is based on allocating a fixed number of seats to women, the amendment of the electoral system currently in force remains an appropriate solution, especially since the one-vote system limits women’s chances of obtaining seats in the Parliament. Additionally, the state can require the parties to allocate a number of seats for women within their electoral lists.

Solutions are available but only if there is a political will that believes in women’s ability to make a difference in a pluralistic political scene. The Kuwaiti parliament, whose members have broad legislative powers and which creates a distinct and unique political movement, is expected to be more than just a monochromatic parliament.