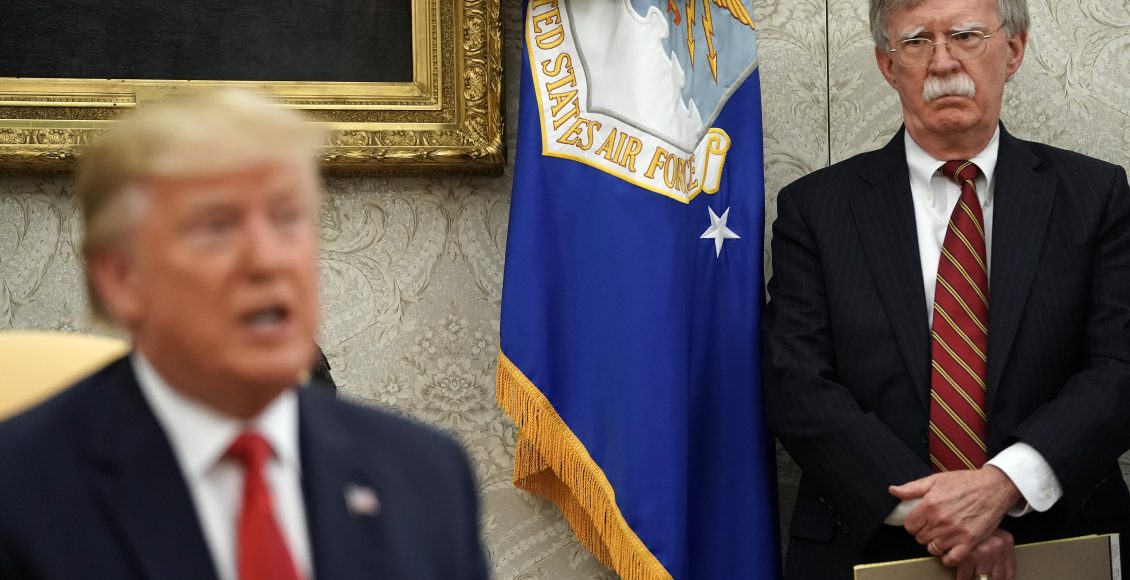 The latest twist in the Iran saga is the abrupt sacking by President Trump of his National Security Advisor John Bolton. Bolton says he resigned, Trump says he fired the moustachioed ultra hawk. It scarcely matters which version is correct. Nor does it mean that with Bolton gone, a rapprochement between Iran and the US is just around the corner.

True the president has mused that he is open to talks with the Iranian president Hassan Rouhani, even going so far as to claim that Iran wants to meet. But the Iranians were quick to reiterate their position that there will be no negotiations unless and until sanctions are dropped. As Rouhani put in a blistering condemnation of the US “Iran’s policy of resistance will not change as long as our enemy (the United States) continues to put pressure on Iran.”

The Iranian foreign minister Javad Zarif was exultant that one third of what he derisively calls the B team – Bolton,  Israeli Prime Minister Benjamin Netanyahu and Saudi crown prince Mohammed Bin Salman – had been consigned to the dust bin. But he was clear, too, that the defenestration of John Bolton hasn’t altered Iran’s game plan to stare down the sanctions while gradually stepping up its nuclear enrichment programme. And he derided Trump’s latest sanctions move in the wake of Bolton’s firing: “Thirst for war —maximum pressure— should go with the warmonger-in-chief (Bolton).”

Meanwhile the French president Emmanuel Macron has come up with a novel approach to keep the nuclear deal alive with a $15 billion aid package that would cover some of the losses in oil revenues the Iranians have suffered. Such a deal would put a huge dent in Trump’s sanctions strategy.  So one would suppose that the president was hopping mad about Macron’s plan. Not so according to a report in the Daily Beast which claimed Trump has “left the impression with foreign officials, members of his administration, and others involved in Iranian negotiations that he is actively considering (the Macron plan).”

That the plan is a carrot intended to bring Iran back into compliance with the Joint Comprehensive Plan of Action (JCPOA) that Trump’s White House predecessor Barack Obama so diligently hammered out and that Trump unceremoniously tossed out more than a year ago, calling it “the worst deal ever”, has left observers bemused and confounded.

As one analyst  succinctly put it: “I don’t understand the point of withdrawing from the Iran deal and sanctioning Iran but then giving Iran financial aid to offset the effects of the sanctions in order to induce them to stay in the deal.”

The best way to understand the erratic shift in Trump’s approach is to see it for what it is: another failed foray into the deep waters of foreign affairs about which the president understands little or nothing and for whom consequences seem to mean nothing. Bolton a few months before his sacking had claimed Washington was going to “squeeze them until the pips squeak; the mullahs will have to change their behaviour drastically or face economic disaster.” The only pips doing the squeaking today are the ousted Bolton and the befuddled Trump. No wonder Zarif is feeling cocky and Rouhani is talking tough.

After all, Iran knows a thing or two about living with sanctions. And the Iranians also know how desperately the Europeans want to keep JCPOA alive – hence the Macron gambit. The departure of Bolton strengthens their hand and steels their determination.  They read Trump’s vacillations as weakness. In that regard, it’s noteworthy that one of the reasons the president sacked Bolton is because his national security advisor was arguing strenuously that  the president, by softening his  position, was playing into the hands of the Iranians. Bolton wasn’t wrong about that and the fact he is gone only reinforces Tehran’s sense that it is winning the game.

For now, however, the only tangible win is that the possibility of war breaking out has been significantly dialled down. Iran will stay the course, confident that go or stay Trump’s strategy is a busted flush. For his part, Trump may be thinking he can pull the wool over American voters’  eyes by doing a deal with Iran which he will claim as a great diplomatic achievement, “probably the greatest ever”  but which in reality will wind up looking much like the very deal he pulled out of.