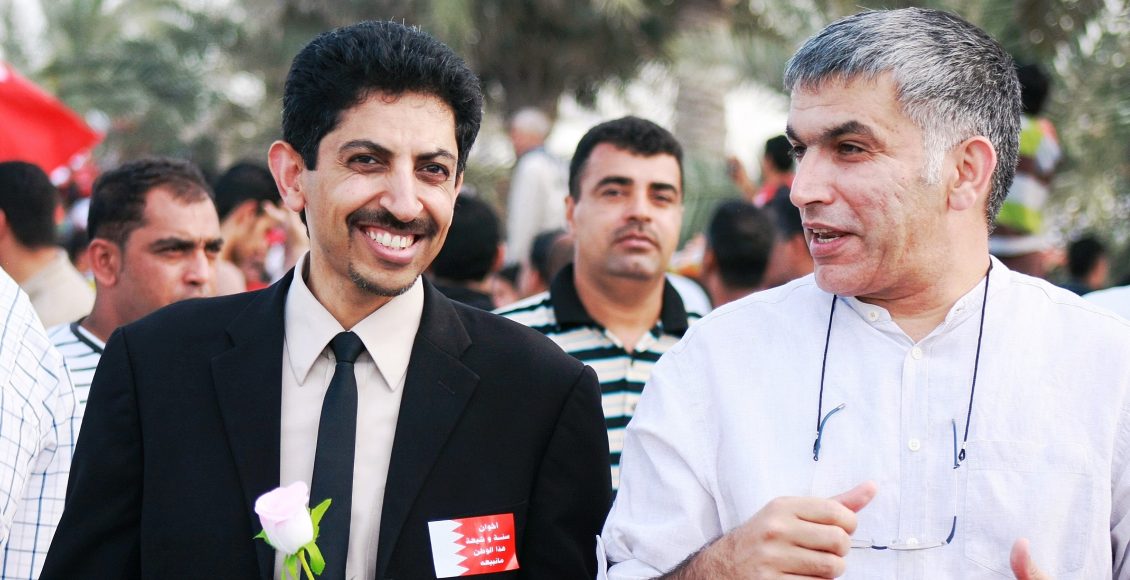 Abdulhadi al-Khawaja, the Bahrain human rights activist, was arrested on the night of 9 April 2011. During the arrest at his family home, he was brutally assaulted and his jaw broken in four places. On 22 June, barely two months after his arrest, he was sentenced to life after a show trial in a military court that violated any principles of judicial fairness.

He has now spent more than 10 years in Jau Prison, notorious for its ill-treatment of inmates. Al-Khawaja holds Danish citizenship: he was granted political asylum there in 1991, returning to Bahrain in 1999 during a period of political relaxation and reform. On 22 January this year more than 100 organisations wrote to the Danish prime minister Mette Frederiksen calling for her government to “renew and strengthen efforts to ensure his immediate and unconditional release so he can be reunited with his family and receive much needed medical treatment and torture rehabilitation in Denmark.”

The letter provides graphic details of the treatment meted out to al-Khawaja from the moment of his arrest: while blindfolded and chained to his hospital bed, he was tortured by security officers immediately after major surgery to his broken jaw which “forced the doctor to ask the security officers to stop as it would undo the surgical work.”

Throughout his imprisonment he has conducted hunger strikes to protest prison conditions,  the curtailment of his family’s visiting rights and phone calls and the removal from his cell of all his reading material. He has declined medical treatment when he can in protest at being strip searched, blindfolded, and hand and leg cuffed before being seen by medical staff.

The  letter to the Danish prime minister notes that in a recent call, al-Khawaja stated that “prison authorities are arbitrarily denying him proper medical treatment and refusing to refer him to specialists for surgeries he requires.” The letter adds: “denying a prisoner adequate medical care violates the United Nations Standard Minimum Rules for the Treatment of Prisoners, known as the Nelson Mandela Rules.”

With Joe Biden now in the White House – and multiple signals emanating from his new administration that human rights, utterly disregarded by his disgraced predecessor, are now on the front foot – the Bahrain government may want to have a reset on its own awful human rights record and its treatment of political prisoners.

Among those pressing for the reset is the New Jersey Democratic congressman Tom Malinowski. He was unceremoniously ordered out of Bahrain in 2014 when he was the then Assistant Secretary of State for Democracy, Human Rights and Labor in the Obama administration. Malinowski had had the temerity to meet with the head of the opposition Al Wefaq political society Sheikh Ali Salman, a move the Bahrain regime deemed was “counter to conventional diplomatic norms.”

Sheikh Salman was subsequently arrested and in 2018 sentenced to life in prison on charges related to the Gulf feud with Qatar that were transparently bogus. Al-Wefaq was outlawed in 2017.

Congressman Malinowski may well find a bipartisan ally in Republican Florida senator Marco Rubio. Rubio is on record calling for an end to repression in Bahrain. As he argued in a letter to then President Trump in September 2019 (co-signed by the Democratic senators Chris Murphy and Ron Widen): “Bahrain is a strategic ally in an important region and, critically, Bahrain hosts the United States Fifth Fleet.  It is precisely for these reasons that we are so concerned by the government of Bahrain’s concerted efforts to silence peaceful opposition and quash free expression.”

Rubio specifically mentioned al-Khawaja by name noting that he and others  have been jailed for peaceful protest: “These prisoners are merely representative of the thousands of others who remain locked away for exercising their right to free expression.”

As Biden settles into office, Middle East dictators are nervous.  The president has messaged clearly that the pass Donald Trump gave them to crush dissent with impunity is well and truly cancelled. As they strategize on how best to deal with the new norm, sending positive messages will not go amiss.

One such message would be to set Abdulhadi al-Khawaja free, he and the many other political prisoners held in Jau simply for calling for the right to speak freely and openly without fear of consequence