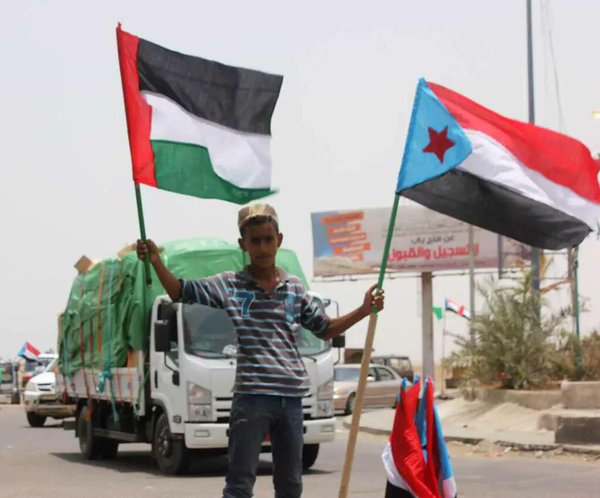 The severity of divisions within the Yemini society has deepened with the war, providing a drive for implementing projects that aim at promoting national unity. Yet, different factors have hindered the success of these projects, some of which materialized by the force of arms. Indeed, the absence of an effective Yemini political authority that guarantees equal and shared rights for its citizens led to the emergence of political powers that are in favor of dividing and fragmenting the country. In addition, the role played by local and regional participants in the Yemini war as well as the intensification of sectarian and regionalist discourses have promoted divisionist aspirations.

The war resolution which was adopted by al-Houthi and Saleh forces provided a general framework from which divisionist agendas emerged and gained their legitimacy. Indeed, the war was an opportunity for a minority to impose its control over the country and cause the displacement and death of many southern citizens, many of which responded by expressing separatist ambitions. In this sense, the war initiated by al-Houthi and Saleh group has revived historic southern grievances against the north and which calls for a secession from the Yemini state. Al-Houthi and Saleh militias’ management of controlled territories has provided a further reason to seek a divided Yemen expressed through the political and sectarian mobilization against other governorates as well as the adoption of separatist policies aimed at excluding northern governorates from the historic and national fabric of a unified Yemen.

Indeed, Yemen’s legitimate government is not better than the status-quo government in Sana’a since it failed to ensure security as well as basic life necessities in southern, liberated territories. This failure raised awareness among southerners of the the inadequacy of the legitimate government in providing an exemplary national model, thus contributing to the decline of its popularity in favor of pro-independence political authorities. In addition, the chaotic situation in southern Yemen has fed a regionalist, separatist discourse in the cities that are witnessing armed confrontations.

The independence and separatist projects that Yemen is currently witnessing are emerging in a volatile geopolitical context. In such a context, the project for a unified federal state consisting of six regions emerged as a proposal adopted by President Hadi and considered as one of the outputs of the national dialogue. In addition to the repressive conditions under which the proposal was produced, a unified state does not represent a safe choice in light of the transformations wrought by the war, which hinders its implementation. Indeed, the war has created isolated and closed social and cultural infrastructures across all cities as well as armed groups that took advantage of these infrastructures to build their sectarian agendas. Thus, the proposal for a unified state, which President Hadi is still optimistic about, has been destroyed by the war, turning it into a divisive rather than a national project and contributing to the long-term transformation of Yemen into conflicting regions.

On a different hand, a federation composed of two regions divided along previous borders emerge as a project adopted by a group of the Southern Separatist Movement or al-Hirak that sees this proposal as a fit solution to guarantee a fair distribution of wealth and power. In addition, the quest for independence is on the agenda of al-Hirak leadership, which has been calling for the restoration of the former state of South Yemen.

The war and its repercussions have undoubtedly destroyed the prospects for a unified Yemeni state, especially after al-Houthi and Saleh groups announced themselves as sponsors of this political project. At the same time, one cannot bet on the multiple projects that have been proposed by different political parties as well as extremist groups that rely on armed force as well as regional powers to achieve their agendas. Indeed, the risks of these divisionist projects are various and the challenge of implementing them is grave. From a political perspective, divisionist aspirations did not emerge from a national movement but grew from social and political groups made possible by the force of arms, the ongoing war, as well as regional agendas. As such, these political projects are one of the war inputs. From a national perspective, implementing these proposal means depriving the Yemeni population from their right to determine their future, granting this power instead to warring parties. From a security and military perspective, the absence of security in most Yemeni cities, whether those still in a state of war or those already liberated, is an obstacle to the normalization of everyday life. In addition to the risks involved in changing the form of the state, the growing emergence of religious extremist groups, such as ISIS and al-Qaeda, hinders the implementation of any of these projects or leads to an alliance building with armed groups to achieve them, possibly ushering into a renewed cycle of violence. Lastly, from an economic perspective, the collapse of the Yemini economy and the deteriorating humanitarian conditions, leading the population on the brink of famine, represent a real challenge to realizing political divisionist agendas.

The political projects and scenarios proposed today do not represent a real solution to the Yemini national problem since they fail to address the roots of the problem and are concerned instead with the form of the state. As such, these proposals represent unknown territories, undermining the future of Yemeni citizens and preventing the achievement of political stability. Yet in a society living a state of war and lacking a unifying national authority to make decisions on the form of the state, defining the political future of Yemen may not be determined in accordance with local separatist and independence struggles but rather according to the interests of regional powers investing in the war.

As a key player in the war and crisis in Yemen, Saudi Arabia is careful to support political struggles that align with its strategic interests as well as protect its national security from the flow of violence over its borders. Whether unified or divided, the form of the Yemeni state is not major concern for the Saudis as long as that state is capable of protecting Saudi interests and influence in the region, whether it was the legitimate government or any other independent authority from the south.

Unlike Saudi Arabia, the UAE’s agenda has been clear in Yemen since the Arab military intervention, focusing on south Yemen as a future target for its interest in the country. The Emirati diplomacy succeeded in achieving this goal. On one hand, the Emirates played a major role in liberating southern territories and thus guaranteed its popularity amongst the citizens of the south. On the other, it provided relief efforts through the UAE Red Crescent as well as ensured financial support for the leaders of al-Hirak. The UAE’s position on the separatist struggle is evident in its media, voicing support for an independent South Yemen, which the Emirates sees as a project that could further its economic interests in the south in general and in Aden in particular as well as prove its presence as a rising regional power.

The dominating local and regional powers are pushing for one of the worst agendas for diving Yemen. This notion of a divided Yemen has ceased to be a source of fear for Yemenis as it has become an evident possibility. Indeed, the conflict in Yemen has created a defined geographic map: the status-quo government in the capital and other northern governorates, a legitimate government in liberated southern territories, and other Yemeni cities controlled by armed groups that can align with any project that serves their interests.

The war in Yemen has been dynamic in producing heroes and suffering victims. It has also created a new geographic map that can be considered as a potential political scenario waiting for regional support to be turned into reality.