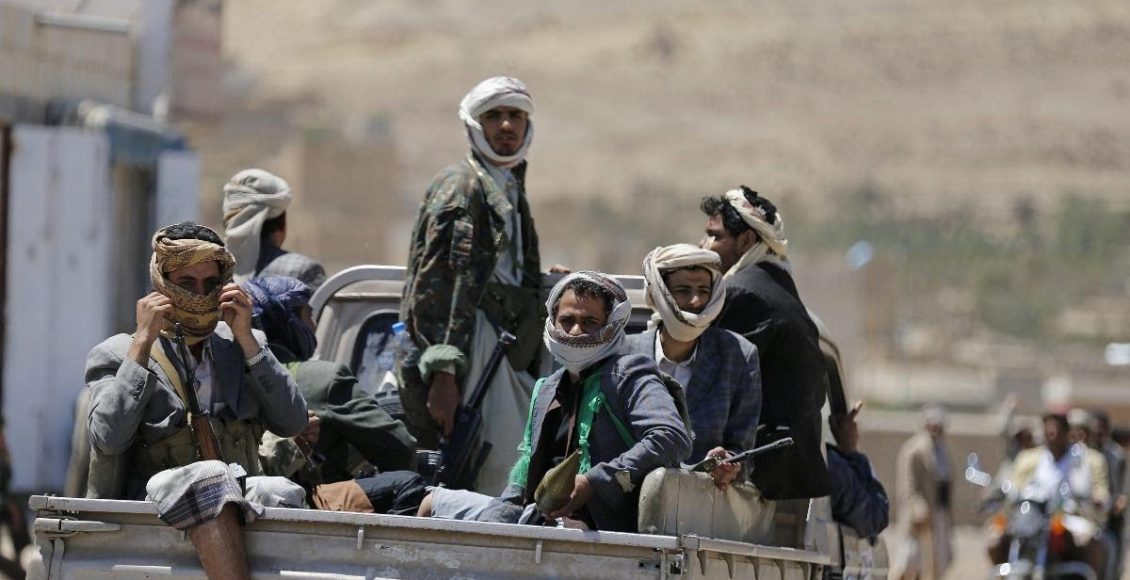 For quite a long time the activities of Al-Qaeda have been heavily influenced by the roles that the Yemeni State had adopted and experienced; in the long decades of the Yemeni state weakness there was an ever growing increase in the activities of the militant organisation. Either under the wing of authority or other political parties, or imposing total control on some areas after the expulsion of representations of power from them.

From this point, the joint coup by the Houthi group and the former president Ali Abdullah Saleh’s militant against the Yemeni authority and undermine the foundations of the state gave further opportunities for the extremists, al-Qaeda, state organisations and other extremist groups to stretch and expand on the ruins of the state; therefore the coup caused dangerous social and political repercussions.

This placed the state and civil society in a situation of exposure to armed forces and jihadi organisations, where the coup strengthened the political and social division quite sharply as it spiralled into armed confrontation between the Houthi group along with Ali Abdullah Saleh’s army against the supporters of the legitimacy of the Yemeni president, Abd Rabbuh Mansur Hadi.

Al-Qaeda has invested in the cycle of political and societal violence and expand its social base. Plus the Houthi and Saleh’s led coup against the state authority provided Al-Qaeda a reason to save what remains of the manifestations of the state, especially in the southern regions of Yemen.

After the advances that the Houthi group and the Saleh’s forces had accomplished across the Yemeni cities, the struggle for power became a complicated battle due to playing on the sectarianism issue which they have all exploited in the conflict. This rejuvenated the image of Al-Qaeda which suddenly became a representation of the opposed sectarian militants; the only armed Sunni force that is capable of defeating the Houthi group. Plus the regionalisation of the conflict in Yemen, following the military intervention forces of the Arab coalition led by Saudi Arabia, pushed the political and social conditions to a more serious situation, turning Yemen into a proxy war ground between Saudi Arabia and Iran, accompanied by political and media rallying sectarian tension. All these factors made Yemen an attractive land for armed jihadist organisations, whether ones that are already present such as Al-Qaeda which is expanding its presence at the expense of the rules of other parties and religious groups, or the emergence of new jihadist groups like the Islamic state (ISIS), “Daesh”, which in turn aspires to expand its control at the expense of al-Qaeda.

The combined internal and external factors which has resulted from the war in Yemen are in fact serving the interests of Al-Qaeda. The sectarian dimension that has dominated the war, directly influenced the political polarisation, which enabled the Al-Qaeda organisation to spread its roots in term of social presence in Shaafa’is areas as the spearhead for the defence of the Sunnis.

On the other hand, the preoccupation of local and regional parties in the war and armed confrontations made them unaware of the establishment of the organisation’s training and missionary centres where jihadist activities are practiced. From the beginning of the political crisis and the war in Yemen, Al-Qaeda strived to distance its self from being directly involved in the war and avoid its related cost, even in the sporadic confrontations against the Houthi group, it still did not suffer human and military losses. The ongoing war between the Alliance of the Houthis and Saleh on the one hand and the Popular Resistance Alliance Arab on the other proved only meaningful for Al-Qaida in giving it vital area for expansion and advancement as they took advantage of the weakness and absence of the state and the erosion of society and the nature of the sectarian war to strengthen their human resources and presences. As they await the right moment to pounce on the Yemeni cities; as they are anticipating the fall of all the parties involved in this conflict and will exit the war exhausted and will be no match for Al-Qaeda as they won’t have the ability for future confrontation which paves the way for Al-Qaeda to protect its existence.

During the past year of the war, Al-Qaeda hovered its activities between expansion and compression, then expand again and devouring a large area of the geography of Yemen, it has characterised the first phase by its intensive activities, assisted by the ease of movement from one city to another, taking advantage of the state authority’s absence as well as political and social forces who were more concerned with the war. At this stage, in April 2015, Al-Qaeda took over the city of Mukalla without military resistance or civilian one for that matter, Mukalla’s importance in both political and economic matter made the organisation declare it an Islamic emirate.

Al-Qaeda worked to intensify its efforts to make Mukalla a safe and protected military base which can be used in its expansion plan in establishing the much talked about and desired Islamic caliphate state. They started by establishing their own private institutions that replaced the state centres, then entered into a network of political and social alliances with a number of tribes that formed the social ‘incubator’ that provides protection in the city.

Al-Qaeda did not only stationed itself in Mukalla but headed to the surrounding villages and rural areas to enhance security and focused its efforts at this stage to try to consolidate its statehood in Mukalla, and dominated the performance of the political and social latency, launching arrests, chases systematically against opponents, working to achieve sufficient economic stability in its emirate through full control over oil resources in Mukalla, the most important port city of Hadhramaut. Al-Qaeda does not have at this stage any noticeable military action, apart from sending armed members of the organisation to fight the Houthi militias and Saleh in the southern regions under the umbrella of the Salafist organisations.

Despite the state of latency that has characterised the performance of the Al-Qaeda at this stage, it did not escape from being a target for US drones that have killed a number of prominent leaders and the repercussions that were left behind such as the killing of “Nasser al-Wahayshi,” on the 12th of June, 2015, which led to the succession of the controversial “Qasim al-Rimi,” or the conflict with ISIS “Daash” who claimed responsibility for the attacks in the city of Sana’a and other areas of Yemen.

During the third stage of Al-Qaeda’s activities, it coincided with liberating the southern regions from the militias; Al-Houthi and Saleh’s, and the failure of the legitimate authority in managing the liberated areas made Al-Qaeda appear as an expansive power. They also established training centres for Jihadist volunteers within the villages of Wadi Hadhramaut and were able to extend their influence outside the city of Mukalla, spreading their control to the cities of Shabwa, Abyan and Shahr and Lahij, and even to areas as deep as in the city of Aden. This witnessed numerous assassinations of civilians as well as political and military by both Al-Qaeda and “Daash” – ISIS, where the most notable of theses assassination was that of Aden city’s governor, “Jaafar Mohammed Saad”. Al-Qaida also entered into a direct military confrontation with the legitimate authority and its regional allies, bombing the presidential palace in Almashiq and the centre of Arab coalition operations.

The expansion of Al-Qaeda, as a single organised power that raised on the ruins of war and the failure of the restoration of the state, is not in fact the most dangerous element at this stage, but what is far more dangerous is Al-Qaeda’s possession of economic resources of oil in Mukalla, and the organised and systematic military that is both advanced and sophisticated including; missiles variety and anti-aviation Platform missiles, used in military operations against the legitimate authority and the forces of the Arab Alliance, where an UAE plane was shot down a few months ago in the city of Aden, and intercepted an Arab alliance missile in Lahij and Abyan.

As the Arab Coalition realises the risk of Al-Qaeda’s expansion and occupation of the majority of the liberated areas, the coalition forces recently entered into direct confrontation on the front line with Al-Qaeda for the first time since the war had begun, where intensive raids on its strongholds areas in the city of Aden and on the training centres in Shabwa and Lahij and Abyan, however the military strikes did not affect the expansion and military power. The geographic region of Al-Qaeda does not have the edge, its borders are flexible and are subject to expansion, making Al-Qaeda’s strength comparable to any Yemeni political or social force. Al-Qaeda survived the war’s deep psychological, social and economic effects and these factors represent a source of strength to them for the legacy of religion that became emphasised in unprecedented way as a result of the war, not only among the poor communities but even within the middle class have resorted to religion and joining armed groups which is a method adopted by some Yemenis to resist war and the predominance of a Saleh’s and Houthis in the south of Yemen.

To confront the hard-line religious groups in the absence of the state through the use of military force does not achieve anything but strengthen its presence in a society that leads to religious extremism. Therefore the first step should be the revival of the manifestations of the state and its authority in the Yemeni cities, then put a deliberate systematic mechanism to deal with the religious extremism phenomenon and involvement of young people in the armed jihadist organisation and the dismantling of all armed militias in their various ideologies and the disarmament of the community. Plus the need to wipe out the sources of extreme religious thoughts and stop sectarian speeches that incite hatred and pave the way for political parties, civic and cultural organisations.

In a society such as Yemen, stripped of its sovereignty and without political or legal protection, entering its second year of war and the accumulation of more losses and psychological defeats and fragmentation of national identity, all have played a major part in dividing the society deeply in both political and sectarian divisions. It seems that such a society will not recovers soon from the abuse that they have suffered, it would be impossible in this case, the restoration of a central Yemeni state that can confront the religious militias, that eats away at the body of the community to hinder its development and expand even within the body of the future state.