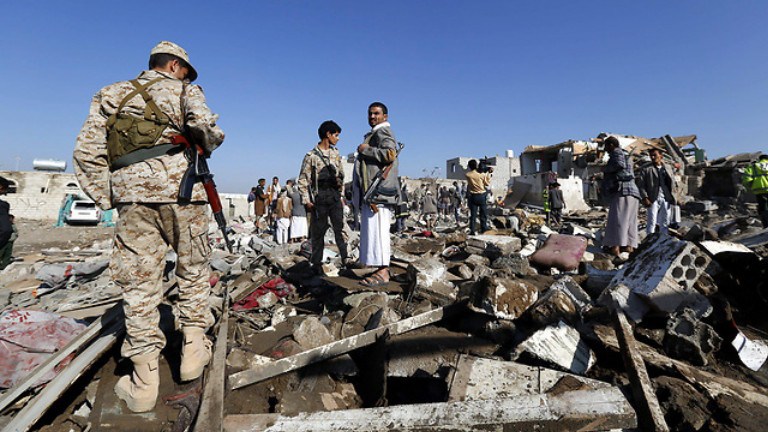 The intricacies of the Yemeni crisis do not stand regarding the status of the war in which Yemenis pay the price heavily, but exceed the inability of the warring parties to return to former political box before the fall of the capital Sanaa by Al-Houthi Group and the forces of “Ali Abdullah Saleh.” It is then that the Yemeni conflict stretched and transformed into a regional conflict; that is, the fast-moving events have combined together to increase the complexity of the crisis, including the intervention of the regional states. Therefore, the political parties stress upon their refusal to make political concessions to help the synthesis of natural negotiating that may resolve a sustainable configuration of the crisis. Finding a common ground for a political solution between the local parties and their regional allies is obstructed by the undisciplined local groups that sprang up during the war and became more visible in the field and have their own political agenda.

Despite the obstructions and the complications in finding any political solution, the war cannot carry on forever; sooner or later, a political solution will have to be regarded to resolve the issue. It is essential to get rid of those obstacles and enforce the regional mediator and the UN envoy –Ismail Ould Cheikh Ahmed– efforts in the normalization of relations and trust between the political parties.

Certainly, the regionalization of the Yemeni conflict, which began with a military intervention of the Arab coalition led by Saudi Arabia to end the Houthi rebellion in favor of the legitimate authority of the President “Abed Rabbo Mansour Hadi,” led to the freezing of the political process and transmission of the decision-making from the Yemeni parties to the regional powers as “Hadi’s “authority found itself linked to Saudi Arabia agendas that were moving in the direction of escalating the military operations against Yemen; however, restoring the power once and for all stumbled because of the inability of the Saudi deterrence to stop the threat of Al-Houthi militia in the southern borders, forcing Saudi Arabia to accept the participation of its ally in the negotiations. The government of “Hadi” participated in two rounds of negotiations held in June and December last year, and during in the first and second Geneva negotiations, he welcomed the Gulf initiatives and the outputs of the national dialogue, as well as the resolution of UN 2216 which required Houthi and Sale to withdraw from the Yemeni cities and return the looted weapons to the State.

Similar to the position of legitimate authority and the Arab coalition supporting it, the Houthi and Saleh were betting throughout the war on the continuation of the military option; that is, the contribution in two rounds of negotiations with the government, “Hadi” was not convinced of the resumption of the political process because it was subjected to the pressures of the regional parties, Iran and Russia, and to gain time so that the alliance can improve the military balance on the ground in its favor. The requirements of Al-Houthi alliance and Saleh launched from a single angel that concentrated on stopping the Saudi-led military operation in Yemen without giving any consideration to stop the war in the Yemeni cities or around the border of Saudi as well as agreeing on excluding Hadi from power and forming a caretaker government. Al-Houthi Group and Saleh rejected the implementation of the UN resolution; that is, they considered it a way of attending to the authority of “Hadi” and abolishing the gains realized on the ground. While the initial agreements in the “Second Geneva” provided to consolidate confidence beginning with the delivery of humanitarian aid to the city of Taiz and the release of some prisoners held by Al-Houthi Group which did not comply with any of these demands. Adding up, the security committee headed by Brigadier-General Salim Raad failed in monitoring the cease-fire agreement, which led to shutting it down. Not to mention that Saleh went beyond that; he blew up the foundations of the Second Geneva consultations by announcing his refusal to negotiate with the government of “Hadi” and insisting on negotiating straightway with Saudi Arabia, which led to the freezing of the third round of negotiations. However, the failure in settling the cessation of hostilities was expressed by the UN envoy in the last briefing on 17 February.

The interventions of many parties in the Yemeni crisis and drifting to the military option are the indirect causes of the lack of fueling acceptable political settlement to the Yemeni parties. In order to move forward in achieving this settlement, first it is required to put pressure on the intervening regional powers to cease its interference which caused the blockage of the political horizon and prolonging the war. It is also imperative for Saudi Arabia must learn from months of military failures because ten months of Storm Packets Process did not achieve victory over al-Houthi and Saleh except for doubling the suffering of the Yemenis, and therefore it would be proper to take a diplomatic path through political consultations to achieve their agenda, including access to international guarantees to prevent al-Houthi and Saleh from targeting its territory. The international community, however, must put pressure on Iran’s regional ally – Al-Houthi Group – to stop financing arms.

The region’s greatest rivalry, between Saudi Arabia and Iran, has become rapidly and significantly more toxic in the past few days overshadowing the political settlement. It doesn’t stop where the regional powers lie, but it depends on holding the conflicted Yemeni parties with their personal roles. The legitimate authority adheres to the implementation of the UN resolution as a package, without heeding to any damage done to Yemenis by the continuation of war. Al-Houthis and Saleh reject handing over the looted weapons to the state and withdrawing from the cities because they are demanding the withdrawal of Hadi’s forces, and the designation of a new interim government to manage this process. Clutching to their requirements with the escalation of the war in the cities of confrontations, the parties underline the lack of seriousness in political negotiations by ignoring their objective nature, reducing them with impossible conditions intended to disrupt the settlement and continue the war. Saudia Arabia realizes that any political settlement will eventually lead to the collapse of Saleh and Hadi and will also downsize the power of Houthis or eliminate them, so it sees that the continuation of war is the only reason for the survival of its legitimacy.

Failing in every political settlement in Yemen is the result of the failure in representing Yemenis and ensuring their interests, and the focus of the adjustments to the service of influence of competing political power centers; to succeed in any future political settlement, it is necessary to put the suffering of the Yemenis in the foreground and focus on the national interests of all Yemenis and not only the interests of warring parties. And taking off from human intuition comes out as a comprehensive cease-fire between the warring parties, and creating an international monitoring committee to ensure that no irregularities should occur. Militarily, the settlement should incorporate a synchronization of gradual withdrawal of Al-Houthis and Saleh from Yemen’s cities with the ceasefire, the lifting of land and air blockade imposed by Saudi Arabia, and the cessation of hostilities against the borders of Saudia Arabia. Any political settlement between the Yemeni parties should lead to the restoration of the state and maintain the National Geographic for a unified Yemen, and that the compromise should venture forth on issuing a complete constitution, not a disputed future one and it must be reviewed, particularly with regard to the form and the division of the state into regions based on the fact that it was indirect causes to the erupted conflict. In Yemen, the country that lives an unfortunate quagmire of an unjust war which claimed the lives of its sons, Yemenis are hoping to end this war quickly, but they are aware of the bitter historical experiences that political settlements do not end wars, but may lead to a round of civil strife if such settlements will provide the warring parties their interests. The way to stop the warring parties from being pulled into conflict lies in synthesizing an inclusive national project to achieve the interests of all Yemenis without exception and in which it guarantees them an equal citizenship and a decent life.