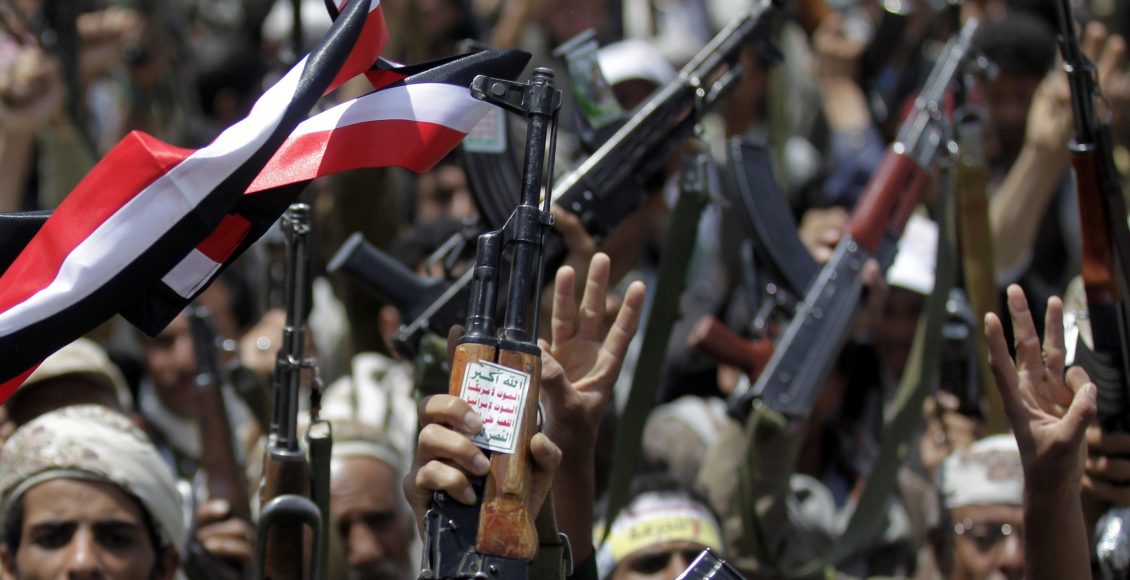 Saleh and Al-Houthi exploited the contention among the Arab coalition countries, especially Saudi Arabia and UAE, in achieving military progress in Taizz and launching wars of reclaim

The current political alliances in Yemen reflect the post-Arab Spring complications, in its social contradictions, sectarian conflicts and regional influences. The alliances between political forces are no longer based on an inclusive national agreement that serves the citizens’ interest. However, most alliances of this stage emerged to maintain non-national interests of certain groups and forces, to defend a sect, belief or territory.

The political exaggeration leads some of these forces to form an alliance with yesterday’s opponents, making it part of anti-Arab Spring revolutionary alliances, contrary to their [previous] revolutionary position. These alliances are distinguished for being established on political or military necessities as a guide, and a main reason for their establishment and coherence. The said reasons might also lead later to the alliances’ disassembly. Most of these alliances do not rely on long-term and joint strategic goals. The bonds between some alliances might extend beyond local dimensions and reach regional dimensions, disregarding the impact of the regional dependent-alliances on the national identity and agreements.

The alliance between the Houthis and former president Ali Abdullah Saleh is considered one of the manifestations of the post Yemeni Spring revolution (2011) alliances. The destabilized transitional period, represented by the rule of president Hadi, contributed to creating a phase of rapprochement between two bitter enemies that had underwent six wars against each other. The rapprochement between the Houthis and Saleh came as a reaction to the exclusion of Houthis from post-revolution gains. It is a rapprochement of interest rather than that of goals and political project. This rapprochement was not intended to develop and become a military alliance if it were not for the political changes witnessed in Yemen, especially in light of excluding some political parties by powerful ones, and transforming the political conflict into a “war over power”.

Saleh did not want his relation with the Houthis to be limited to the political rapprochement or alignment, since he realized that he is able to exploit his old enemy, “the Houthis”, as a tool and façade to undermine the political process and return to the surface. Meanwhile, the Houthis wanted to use Saleh’s military power to achieve their goals in seizing power and toppling the Yemeni cities starting with Amran and ending with the Yemeni capital Sana’a in September 2014. Thus, the rapprochement between Saleh and the Houthis developed into a complete alliance with its military and political aspects.

Since its establishment, the Saleh-Houthis alliance emerged as a war alliance whose military tools predominated the legitimate authority. The alliance succeeded in exploiting its opponents’ mistakes to impose its political conditions and estimates. The Saleh-Houthis alliance launched their war and undermined the transitional period, under the pretext of the draft constitution and dividing Yemen into six provinces. Although Saleh and the Houthis both took part in drafting the constitution, they believed that the division of territories was unjust to them; the Houthis found that [due to the division] they would be denied access to a seaport, and isolated in the province of Azal. On the other hand, Saleh saw that the division would affect the northern power center, which has monopolized the power in Yemen throughout the past centuries.

The Houthi-Saleh alliance took the nature of periodic military alliance, yet it is not an alliance between the political forces represented in the General People’s Congress (Saleh’s party), but rather between Saleh, as a person, with his supporting army, and a militant group that could not transform into a power of a national political structure. This had some parties of the General People’s Congress not interested in this alliance, and thus secessions occurred after that. One of the movements that are part of the Houthis was not satisfied by forming an alliance with an old enemy and a stronger opponent. This alliance did not undergo a united strategy between both parties, but was rather subjected to the military strategies of Saleh. This led to the infiltration of Saleh’s army-backed Houthi militias into Eden, in pursuit of Yemeni President Abd Rabbuh Hadi. Meanwhile, the Houthis sought to win the war in Marib as a priority.

With the launch of military operations of the Saudi-led coalition at the end of March 2015, and with Saudi Arabia becoming a major player in the Yemeni conflict in support of “Hadi’s” legitimacy, the Houthi-Saleh alliance became stronger, whether in terms of current strategic goals or media rhetoric. On one hand, it is an alliance of an internally open war against its opponents in the Yemeni cities, considering them agents of foreign countries. On the other hand, it is an alliance against the external aggression, as it invests in the aerial and land siege, and the death of civilians by the Arab Coalition raids, considering that their war is in defense of their violated national sovereignty. The Houthis and Saleh succeeded in giving the goals of the Arab coalition a sectarian trait, since the Houthis were able to mobilize the Zaidi sect in its wider aspect and invested it as a social embracer, considering that the war led by Saudi Arabia is a Sunni war to wipe out Shiites. Meanwhile, Saleh made use of the Zaidi sect fears that the war would deprive the northern region from political and economic privileges. The sectarian incitement in mosques and Saudi and Iranian [television] channels contributed to creating a perfect environment for the sectarian mobilization.

In the environment of war that relies on sectarian and geographical mobilization, the regional or sectarian alliances become stronger and the bigotry authorities become strong points for these alliances in the near future. However, these authorities might lead to the disassembly, or even conflict, of the coalitions in a state of peace. Therefore, we can see the success of the Houthi-Saleh alliance, which emerged as a war alliance of several bigotry motives, in exploiting the nature of the transforming war in Yemen that took sectarian aspects thereafter. We note that the performance and conflicts of the Arab coalition were strong points in favor of the Houthi-Saleh alliance. Nonetheless, there are other factors of self-power of the Houthi-Saleh alliance, on the humane, economic, political, and media levels. On the humane level, Saleh and the Houthis rely in their war on the support of several trained Yemeni tribes in the far northern region. On the military level, the army leaderships that were part of his authority, and now lead most of the military operations in the cities support Saleh. In addition, the Houthi-Saleh coalition relies on the Yemeni state’s revenues, whether stolen by the Houthi group from the military camps or stored with the army supporting Saleh.

On the political level, the power of the Houthi-Saleh alliance lies in presenting the coalition as being presided over by more than one leader, as two political forces that have their different political estimates. This tactic was revealed in the Geneva 1 and Geneva 2 political negotiations. On the media level, Saleh and the Houthis united their media fronts in one, combining that of Saleh’s army and Houthi’s popular committees. This achieved harmony in the field, as there were no signs of confusion in military coordination. The Houthi-Saleh alliance exploited the disagreement and competition between the Arab coalition states, especially Saudi Arabia and Emirates, in order to achieve military advancement in the city of Taizz, or to launch reclaim wars in the region of Morais in the city of Dali.

The wars and political conflicts are the only guarantee for the continuation of war alliances despite their different nature, role or goals. In Yemen, the Houthis and Saleh supporters realize that the continuation of war means the survival of their alliance. They are fully aware that resuming the political process will undermine their alliance. Throughout the past months, the Houthi-Saleh alliance was able to stand firm before the strong legitimacy alliance, taking advantage of the nature of war in Yemen, and of the growing seditions in the structure of Arab coalition and its allies.

The Arab coalition could not achieve partial breach in the front of the Houthi-Saleh alliance for 3 reasons: first, dealing with this alliance as a whole and not as two forces of different political aims, and on the military level, not being aware that the power of this alliance lies in Saleh’s army. Second: the failure of the Arab coalition to neutralize some tribes fighting with the Houthi-Saleh team. Third, the absence of a united vision for the Arab coalition, whether in terms of military operations or the future political path for Yemen. All these reasons contributed to the desperate status due to which the Houthi-Saleh coalition entered war in a depleting environment, which [turned out to be] suitable for them more than any other coalition.

The alliances that are formed to engage in a war or civil struggle shall disassemble and fall, no matter how strong and coherent they are. The Yemenis who were affected by this war know that the Houthi-Saleh alliance is a “civil war” alliance that was established in contradiction to their national interests, and thus damaged the Yemeni social structure. The southerner [Yemenis] regard this alliance as a “tribal-geographical [northern]” alliance that destroyed all national agreements. Meanwhile, sectarian people regard this alliance as a Shiite alliance that seeks to wipe out Sunnis. Disregarding the visions of this alliance, what is assured is that this alliance is a direct reason for the destruction of Yemen, since it transformed the political crisis into a regional-Yemeni war, and thus paved the way for the Saudi, Iranian, and Emirati intervention, making Yemen an easy bounty for the powerful states.