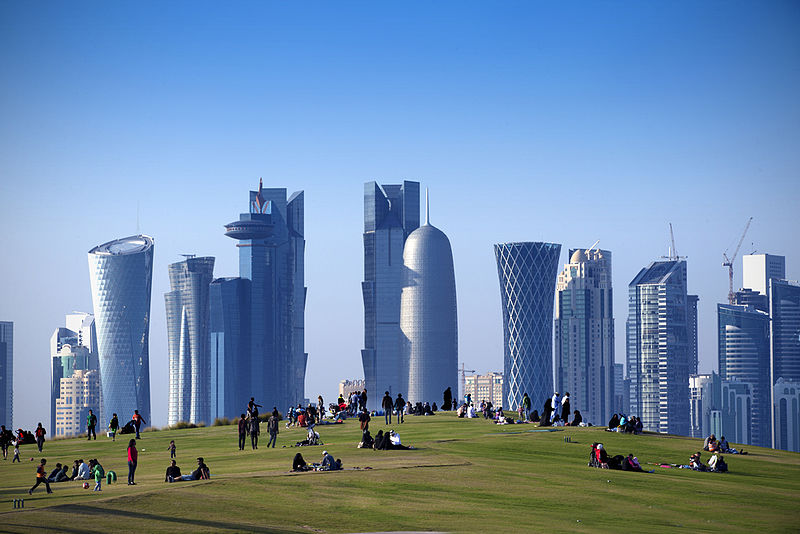 Economic reports published on Qatar’s performance are insufficient to assess the health of Qatar’s economy. Indeed, measuring oil revenues, their declining rates, and the impact they have on the implementation of investment projects is not enough to gauge the national economy, especially in the absence of information on the country’s foreign investments.

Published economic data and statistics on Qatar’s economy may reflect inaccurate results in the absence of other relevant information. In addition, Qatar’s announcement of securing sufficient investments to build the infrastructure necessary for hosting the 2022 World Cup is not necessarily a reassuring indicator of the health of its economy. Indeed, given the economic and political tension the Gulf region is experiencing, greater transparency is required than what is currently exhibited surrounding the economic situation of Qatar.

According to the International Monetary Fund, the sovereign fund of Qatar reached a total of $256 billion at the end of 2015. In spite of this, the national budget suffered a deficit in 2016, urging Qatar to issue bonds in the international market worth 9 billion U.S dollars. Many explanations can be proposed to account for the inability of the sovereign fund to address the state’s budget deficit. However, these explanations should not be taken so as to justify an ineffective management of investments, especially for a country reliant on oil, a commodity highly vulnerable to volatile market fluctuations.

Is the return on these investments greater than the returns generated from borrowing 9 billion U.S dollars from the international market? Answering this question is crucial in assessing the future of Qatar’s economy in general and its performance in 2017 in particular.

If the deficit in the 2016 national budget urged Qatar to borrow 9 billion U.S dollars from the international market and the price of oil, at its best, has not exceeded 50 dollars per barrel, how will Qatar’s economy fare in 2017? This question is crucial when considering the estimates proposed by the Qatar Economic Outlook 2016-2018, listing the equilibrium price for oil at $61 per barrel.

According to the Arab Monetary Fund (AMF), the economic performance of Qatar in 2017 will decline compared to what is expected for 2016. Issued in September 2016, the AMF report estimates that the economic growth rate reaches 3% in 2017 in comparison to 3.2% in 2016. The report also indicates that the primary sources of economic growth in Qatar are restricted to the oil and construction industries.

Though the same report predicts that inflation rates in Qatar will fall to 2.7% in 2017, the economic challenges that Qatar is currently facing indicate otherwise. Indeed, these economic developments, reflected in reducing subsidies, increasing the fee of some public services such as water and electricity, as well as encouraging trends towards removing subsidies from oil, contributes to the rise rather than the decline of inflation rates.

With regards to the fiscal deficit in the Qatari budget, Qatar Economic Outlook 2016 – 2018 report indicates that the deficit has reached 7.8% of the GDP in 2016 and estimates that this rate will persist in 2017 but improve in 2018. This predicted improvement, however, is based on the presumption that oil prices will rise in the international market, an unlikely possibility given the failure of OPEC to agree to freeze the production ceiling. In addition to OPEC’s position on oil production, the economic stability in the region is affected by the Saudi-Iranian conflict and the recent escalation of the US-Saudi disagreement over the rights of 9/11 victims to prosecute the Kingdom of Saudi Arabia.

Indeed, the price of oil in the international market is not a strictly economic issue but also a political one affected by the control of the oil market by multinational companies that primarily serve the interest of the United States and the west.

There is a set of challenges that will face Qatar’s economy in 2017, including those related to the structure of the national economy as well as regional and global economic conditions. What follows is a discussion of these challenges.

The global economy is still going through a pessimistic state regarding its ability to recover from the consequences of the global as well as the European financial crisis. Complicating this state is the worsening financial conditions in China, which is expected to affect the global economy more negatively than the 2008 crisis.

In addition to Qatar’s participation in and reliance on the global market, the political tension the Arab region is experiencing has produced negative economic consequences. Concerns around Iran’s growing influence in the region has urged Gulf states to enter into a conflict with Iran in Yemen and Syria. Qatar’s commitment to Saudi policies and its support of these conflicts have negatively affected its economy by demanding additional national expenditures. This will undoubtedly affect Qatar’s economy in 2017 and possibly beyond given the effect of these conflicts in exhausting the region’s resources over the years of the next decade.

According to Qatar Economic Outlook 2016-2018, the national GDP will witness a significant decline due to the economic policy pursued by the Qatari government in light of the collapse of oil prices. The objective of such policies is to commit to the completion of current investment projects rather than initiating new ones.  In spite of these conditions, talks about diversifying the economy in Gulf states -including Qatar- remain merely a written solution that is repeatedly proposed with the decline of oil prices only to be abandoned as soon as prices rise again.

Indeed, the manufacturing industries do not represent more than 10.7% of the Qatari GDP, and these are industries that rely primarily on petroleum products. Similarly, the construction sector represents 7.5% of the national economy and the service sector around 36.6%, while the largest percentage, 46.9%, dedicated to the minerals and energy extractive industries.

In light of these new economic developments in which Qatar dispenses a large portion of its foreign neighbor, the service sector will be negatively affected. This will also contribute to the predicted decline of Qatar’s GDP in 2017.