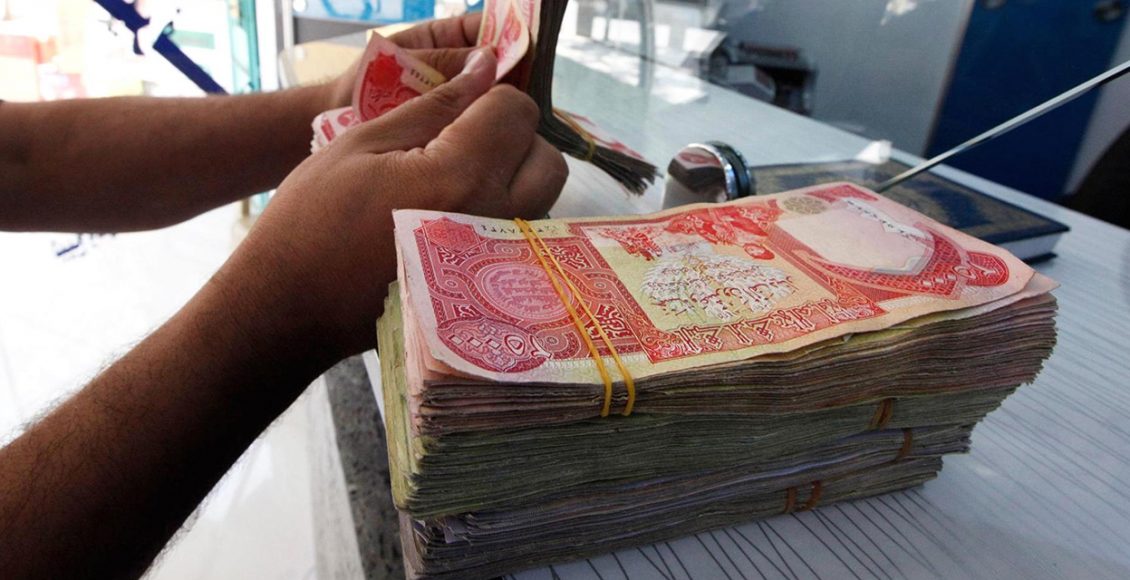 A soon to be released IMF report on the economic situation in Iraq, poses three complex and problematic issues. Including the continuation of the civil war, “Daesh” (ISIS/ISIL) control on quite a few tracts of Iraqi territory that contains oil wells, as well as, the collapse in oil prices since July 2014, and the negative impact of that on the balance of payments, budget deficits, falling GDP, rising numbers of displaced people and the consequent social burdens, as the IMF report estimates that about one-third of Iraq’s population are in dire need for humanitarian aid.

IMF neglects to highlight corruption that has been plaguing all of the Iraqi governments since the occupation in 2003 and to the present day. Three years ago, Iraq was classified among the countries that have the worst corruption in the world, receiving 16 points out of 100. The oil contracts and governmental imports are two of the largest practices of corruption in Iraq.

There is a range of programs announced by the Iraqi government’s economic reform, overseen by the International Monetary Fund in the technical framework, but these programs face difficulties in the light of the above-mentioned dilemmas, especially the decline in oil revenues.

There is no doubt that the achievement of economic reform in Iraq would have a positive impact on Iraq itself, as well as on the entire region but not all of what one wishes one can obtain, there are obstacles to achieving this reform, especially Iraq’s deep humanitarian crisis, which the International Monetary Fund estimates that there are 4 million Iraqis displaced internally, and that the budget has exacerbated the deficit to reach 15% by the end of 2015. Also foreign exchange reserves balance declined from $67 billion in October 2014 to 54 billion by the end of 2015, the IMF expects that the Iraqi currency reserves will reach about $ 42 billion at the end of 2016.

Therefore the economic reform process in Iraq will face many difficulties, at least in the short and medium term, we refer to some of them as follows:

The conflict of political wills increases the difficulties in achieving economic reform in Iraq, whether it is related to the internal situation and the worsening sectarian conflict, or the interferences by countries in the region that seek to increase their influence in Iraq, such as Iran, Saudi Arabia and Turkey, each according to its different size and nature of its role. Therefore, any economic reform program in Iraq, requires a state of internal political stability and security, which is hard to predict in light of the reality of life, and the extended role of “Daesh”, and the tendency for violence between the warring parties there.

Iraq remained for many decades an oil country with membership in the “OPEC” organisation and did not succeed in the transition to a diversified economy, despite the availability of capabilities that helps it, but the Iran-Iraq war, then the economic sanctions imposed on Iraq after the second Gulf crisis, as well as the overthrow of Saddam Hussein’s regime and the occupation of Iraq, leading to the current instability, prevented the success of achieving economic diversification in Iraq.

The economic advancement and reform, as announced by the Iraqi government is a gamble on their plans on oil revenues, in the hope that oil prices are an improved over 2016 and 2017, which is possible but also depends on many factors.

Even if achieved, at best, the rise in oil prices will remain limited and will not meet the needs of Iraq’s finances, which through it can activate investment outside the oil-scale, as well as the fulfilment of social obligations, that is set to deteriorate if the Iraqi government embarked on implementing reforms related to wages and pension system.

The Iraqi government failed to find a way out of fulfilling its promise to meet the state budget deficit, par the local and external borrowing. Already the International Monetary Fund has lent Iraq $ 1.5 billion, and there were arrangements for the issue of international bonds of about $ 2 billion more.

This did not stop the operation of domestic borrowing mechanism through state banks, via bonds and Treasury, which led to the rise of public debt (domestic + external) to reach 62% of GDP, at the end of 2015, after it was up to 39% in 2014, the IMF predicts that this percentage will increase to 66% by the end of 2016.

This dependence on financing the budget deficit through the expansion of public debt limits the government’s authority to fulfil their social obligations towards the internally displaced population and confront the widespread poverty, especially since the majority of displaced people are children and women from marginalised groups.

Iraq is expected to seek financing through the International Monetary Fund; an estimated $15 billion over three years, if they are able to reach an agreement with the Fund during this April, whereby Iraq will receive 5 billion from the fund during 2016. The remaining amount will be given by international institutions and donors from the Gulf, America and Europe over the next two years.

The Fund’s loan will open the doors to Iraq’s external borrowing, especially since the economic governance in Iraq are not subject to authentic auditing, therefore this step will plunge Iraq into a spiral of debt.

Perhaps the complex economic problems that Iraq suffers from is the result of the continuous corruption practices that has plagued the state institutions since 2003, where there was a rapid increase in money smuggling operations to abroad and infringement of the Iraqi Central Bank authorities in following the formal procedures in money transfers.

Despite official talk from home and abroad about the corruption of prime ministers and ministers, there has been no investigation for transparency and retrieval of stolen funds, which adds to the nad reputation of Iraq’s notorious investment climate and induces corrupt figures only into Iraq, at a time when Iraq needs investors who will contribute to making real change in the structure of GDP, the revitalisation of the industry and agriculture movement.

Iraq’s inclusion in the top 10 corrupted economies in the world over the past few years, is enough for economic policy-makers to realise that the elimination corruption is the first serious economic reform and without them you will not find any financial or monetary reforms, and corruption will instantly reap any fruit that can be achieved.

In conclusion, considering Iraq’s current political and security issues that are keeping the government occupied, it is difficult to talk about economic reform, even if oil price improve and all indicators change into a positive reality, they will not change anything from the human reality.

Humans are the goal of development and are its maker. What is the point of increasing foreign exchange reserves or at least the budget deficit, or improving the balance of payments, when simultaneously there is an increase in the number of displaced people at home, or the worsening situation of people in need of humanitarian aid.

The economy is not just passive numbers but social return, that can rise the human standard of living, to receive verification as recognised by human development indices, or those outlined in the Prophets Hadith “He who sleeps secure in its abode, clear of illness in his body, has what is sufficient for his day, it is as if he has the world.”