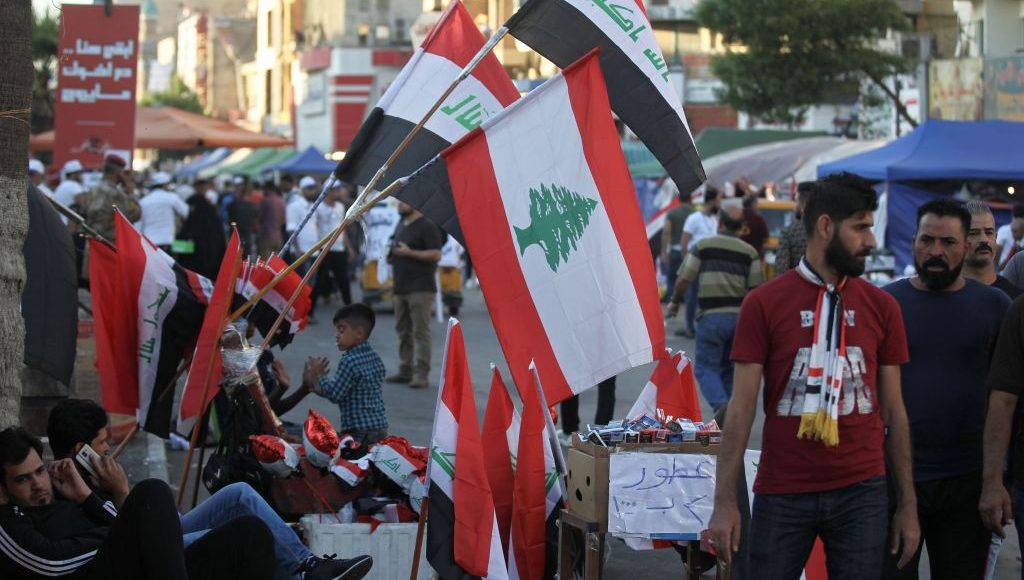 Iraq and Lebanon have experienced an extraordinary rebirth of the power of the street in the Middle East, one that has toppled two prime ministers. In both countries, the protests in major cities are ongoing and the results are uncertain.  In one, Iraq, the response of the authorities has been to resort to extreme levels of violence. In the other, Lebanon, what violence has occurred has come from Hezbollah and other supporters of Iran attacking otherwise peaceful protests.

With Saad Hariri’s announcement on 26 November that he would step aside as caretaker prime minister of Lebanon, the street believed it had scored a significant win.  Hariri had already resigned on 29 October in the face of massive protests that had begun 12 days earlier after the announcement of a WhatsApp tax. Though the authorities quickly scrapped the tax, the demonstrations didn’t stop. Hundreds of thousands of youth and older Lebanese took to the streets demanding an end to corruption and denouncing the ineptitude of Hariri’s coalition government.

Hariri had called for a new government of technocrats but that did not sit well with his coalition partner Hezbollah nor with other political parties who do not want to give up their privileged position in a patchwork parliament drawn on sectarian lines. In a country where by convention the president is Christian, the prime minister Sunni Muslim and the speaker Shia Muslim, with senior cabinet posts set along sectarian lines, it was perhaps inevitable that Hariri’s effort at installing technocrats would come to nought.

But a technocratic approach is probably the only way that Lebanon can extricate itself from its economic mess. The country has one of the highest ratios of government debt to GDP in the world, running at 155%. In order to finance its debt the government borrows heavily both internationally and from Lebanese financial institutions.  The Lebanese banks are happy to lend because they receive a good rate of return on their loans.  But many of these banks, including BankMed owned by the now former Prime Minister’s family, are directly linked to the political elite. Hence the anger on the streets which has been heightened by the banks instituting informal capital controls on the amount of money depositors can withdraw.  For some banks it is set at US$1000 a week, for others $500. Some bank ATMs are refusing any withdrawals.

Lebanon could turn to the Gulf states for help. However, the Saudis and the Emiratis are unhappy with Hezbollah in government and are reluctant to throw out a lifeline. For its part Hezbollah and its fellow Shia partner Amal are determined to hold their place. Supporters carrying Hezbollah and Amal flags attacked protesters on 25 November in a bid to splinter a movement that has remained resolutely united against sectarianism. That spirit was captured in a BBC interview with university student and protester Reem al Rifaii: “this is a revolution because for the first time in the entire history of the Lebanese people religion is being put aside…we don’t want sectarianism to govern us anymore. We are sick and tired of sectarianism”

The situation in Iraq is equally febrile but it has provoked a huge level of violence. The 29 November decision of  Prime Minister Adel Abdul Mahdi to resign has done little to clarify the question of what happens next in his troubled country. Abdul Mahdi will remain in post for 30 days, heading a caretaker government charged with the task of finding his successor in a fractured parliament.

The prime minister’s position, which had already been eroded by weeks of protest, became untenable after rioters attacked and burnt the Iranian consulate in Najaf 27 November.  The authorities responded to further protests in the southern city of Nasiriya the following day with lethal force.  At least 31 were killed when police opened fire.  There were further deaths the same day in Najaf and Baghdad bringing the total to at least 40 with hundreds wounded.  That was enough for Grand Ayatollah Ali Al-Sistani. In his Friday sermon he effectively called for coalition partners to withdraw their support for Abdul Mahdi’s government. Two days later, after a little more than a year in power, he resigned.

The  Iraqi election in May of last year  had left a parliament (known as the Council of Representatives) of some 39 political parties, a patchwork quilt drawn on regional, sectarian, ethnic and tribal lines. The two largest Shia blocks, Muqtada Al Sadr’s Saairun and Hadi Al Amiri’s  Fatih Alliance surprised observers when they agreed a pact in June, 2018 that enabled Abdul Mahdi to emerge as prime minister. Muqtada Al Sadr’s nationalist rhetoric and frustration with the extent to which Iran was meddling made an odd bedfellow with the strongly pro-Iranian Al Amiri.  Still, needs must and there was early optimism that this government of rivals would begin the arduous task of unravelling deep layers of corruption and work toward resolving the country’s massive unemployment crisis and its failure to deliver essential services amidst growing economic chaos.

The failure of the Abdul Mahdi government to deal with any of these issues is what led to street protests beginning on 1 October. The government’s  harsh response and the violence of the protesters built one upon the other leaving, to date, more than 400 dead and an estimated 15,000 wounded. Protesters were exultant when the resignation of the prime minister was announced. In Baghdad’s Tahrir Square, the epicentre of protests in the capital, there was jubilation tempered with a determination to force more change. “It’s our first victory, and we’re hoping for many more,” shouted one demonstrator. Another said “We won’t leave the square until every last one of those corrupt people resigns. Weed them all out. Every single one.”

The power of the street in Lebanon and Iraq is shaking the business and political elites to the core. But whether it will lead to reform and an end to the endemic corruption that has blighted both countries is a question that for the moment remains unanswered. What is unquestionable is that the winds of change are blowing once again.  And blowing too in Iran, Algeria and Morocco. It is an unmistakable reminder that the Arab Spring and the roots of what caused it never went away. No amount of  regime repression, lies and deception will change that reality.  Indeed it will only feed it.