Stealing a march: The UAE returns to Damascus, the Saudis stay home 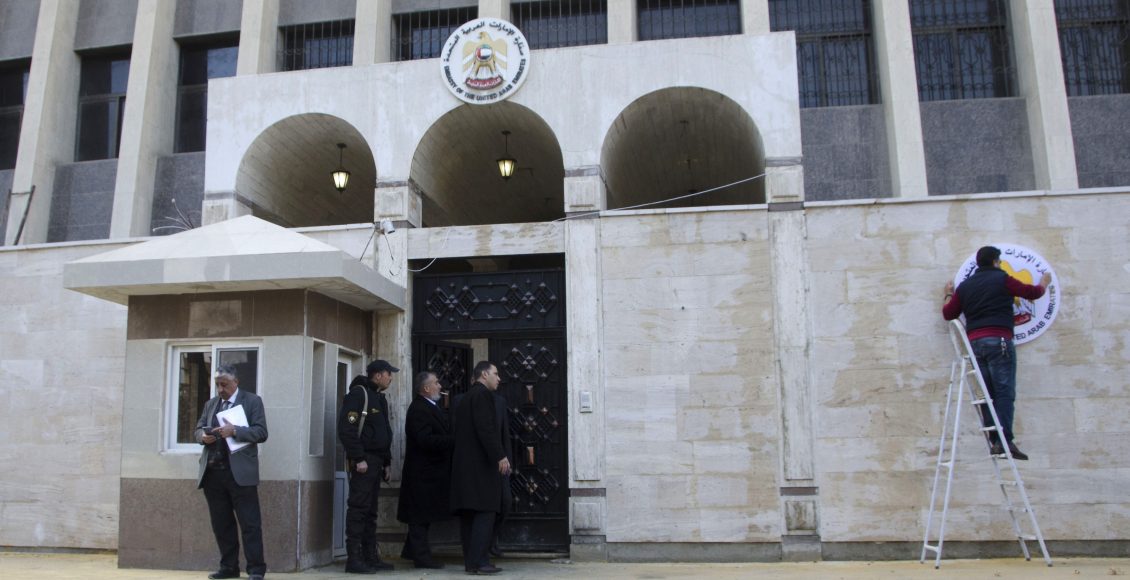 The decision by the United Arab Emirates in December last year to re-open its embassy in Damascus marked a march back from what had been the somewhat equivocal anti—Assad position the Gulf state had assumed in the early days of the Syrian civil war.

Less wholehearted in arming rebel groups than its Gulf neighbours Qatar and Saudi Arabia, the UAE maintained close economic relations with various elements of Syrian president Bashir Al Assad’s entourage. As my colleague Ali Bakeer, writing for Al Jazeera, observed recently: “several internationally sanctioned pro-Assad businessmen continued to do business without a problem in the UAE, including his cousin Rami Makhlouf, Syria’s richest man who reportedly controls as much as 60 percent of the country’s economy.”

So the re-opening of the embassy should not come as a surprise. What is, perhaps, more surprising is that Saudi Arabia and its putative leader the crown prince Mohammed Bin Salman (MBS) have not only declined to re-establish contact with the Assad regime but have, once again, allowed the UAE to set the geo-political pace in the region.

The Saudi minister of state for foreign affairs Adel Al Jubeir announced on 4 March that it was “too early” to re-open the kingdom’s embassy which had been shuttered in March 2012. In a joint press conference in Riyadh with the Russian foreign minister Sergei Lavrov, Al Jubeir said that Saudi Arabia was searching for a political solution, adding  that “the kingdom has always been keen on the integrity of the Syrian territory and the political solution [and] the reopening of the embassy is related to the progress of the political process.”

But the political process will progress once Assad has militarily wiped out the last rebel stronghold in Idlib province, an operation that only international humanitarian concern has delayed from happening. Once Idlib falls, he will sit down with his allies Iran and Russia and with the Kurds who control most of Syria east of the Euphrates and sort out “the integrity of the Syrian territory.” And where will the Saudis be in that process?  Precisely nowhere. The Emiratis, however, under the shrewd and adept leadership of the Abu Dhabi crown prince Mohammed Bin Zayed (MBZ) will be, if not at the table, at least very keen and engaged observers.

The Saudi decision to withhold diplomatic relations is consistent with other foreign affairs gaffes committed by Mohammed Bin Salman. Indeed one could argue that the 33 year old prince has been led a merry dance by Mohammed Bin Zayed, his elder by 25 years.

Take the Yemen war as one example. As it grinds on and on, the Emirati strategy becomes blindingly obvious. For a long time they have cast covetous eyes on the southern Yemen port city of Aden. They see it as a natural extension to the port facilities of Dubai, one that gives them easy access to the Indian Ocean and an alternative to the Strait of Hormuz which they and the other Gulf states share uneasily with Iran.

The UAE is also keen to see the re-emergence of South Yemen, a return to the old days with the country divided in two as it was prior to 1990. The south, with Aden again restored to the status of a capital, would fall into the Emirati sphere of influence.  Towards that end the UAE has allied itself with the secessionist movement in the south. Though there remain strong pockets of resistance in and around the city of Ta’iz, MBZ has largely achieved his objectives.

Meanwhile, the Saudis are stuck with an unwinnable war in the north, taking most of the blame for the prosecution of a campaign that has seen tens of thousands of civilian casualties and food insecurity for millions of Yemenis in a country stalked by the twin catastrophes of starvation and endemic but preventable diseases such as cholera.

MBS, no doubt spurred on by MBZ, had thought that when the war was launched in the spring of 2015, he would secure an easy win over the Houthis and by so doing establish himself as a warrior prince in the mode of his grandfather Ibn Saud, the founder of the modern kingdom. More than four years on and at terrible cost to the people of Yemen, events continue to prove what a huge miscalculation that was.

Undeterred, though, Mohammed Bin Salman, led again by his Abu Dhabi counterpart launched an air, sea and land blockade of fellow Gulf Co-operation Council (GCC) member Qatar in June 2017. Ostensibly it was because the Qataris were supporters of terrorism, a charge that could equally and reasonably be levelled at their accusers. The Emiratis were the primary architects of a campaign of fake news and disinformation aimed at bringing Qatar’s emir Tamim al Thani to heel.

Again, the expectation was that the Qataris would quickly fold their tent and capitulate to a list of demands that, if accepted, in sum total would have amounted to an abject surrender of their sovereignty. They declined and have displayed great resilience in the face of the blockade, which has ultimately proven to be spectacularly ineffective. The only obvious impact is that the GCC is irreparably broken which, I argue, was MBZ’s intention all along.

In December 2017, six months after the blockade was launched,  the “Strategy of Resolve”, a bilateral trade and defense agreement between the Saudis and the Emiratis was released. The Abu Dhabi crown prince called it “an historic opportunity,” adding “we are the two largest Arab economies, forming the two most modern armed forces.”

Rather than having to deal with the often contrary and bumptious views of five other members, MBZ is now in the position of having to influence only one and that the biggest of them all. Destroying the GCC was a small price to pay for such a prize.

He was quick to capitalize with an announcement in June 2018 of 44 strategic projects with the Saudis. The inaugural meeting laid out a grand agenda that in addition to military integration and cooperation envisions a unified strategy for food security, a joint plan for medical stocks, a common security system and joint investment in oil, gas and petrochemicals, all to be achieved within five years.

Abu Dhabi and its clever and hugely ambitious crown prince have, to steal a line from the president of the United States, done the deal of the century. Consider these figures (as of December, 2017): Saudi Arabia has a GDP of $678.5bn, the UAE barely more than half that; the Saudis have reserves of foreign exchange and gold of more than $500bn, the Emiratis less than $90bn; Saudi Arabia’s revenues stand at $171.6bn, the UAE’s is $83.4bn. In the business world, this is what is referred to as a reverse takeover.

Against this backdrop, it is easy to appreciate why the UAE seized the diplomatic initiative in Syria. Though MBS likes to see himself as the emerging leader of the Arab world, it is MBZ, playing on the younger man’s hubris who seems best poised to inherit the mantle.