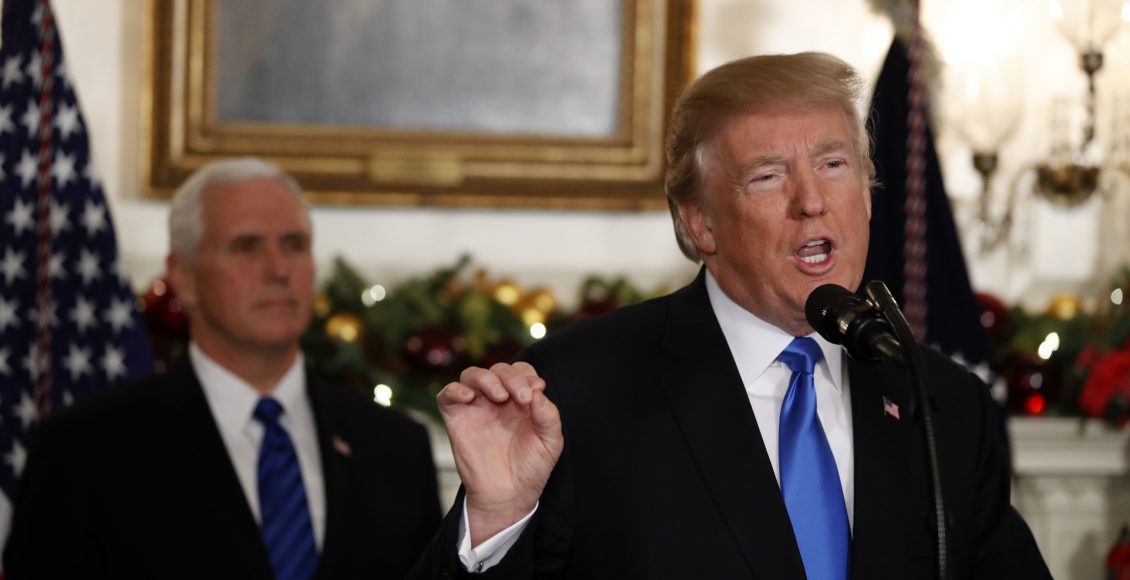 For Donald Trump it was a carefully constructed and nuanced announcement: “I have determined that it is time to officially recognize Jerusalem as the capital of Israel.” Note one word that is missing. It is “undivided” as in “undivided capital” a central tenet of Benyamin Netanyahu’s decades long quest to deny Palestinians their rights to sovereignty and nationhood. The president skirts the topic: “We are not taking a position of any final status issues, including the specific boundaries of the Israeli sovereignty in Jerusalem, or the resolution of contested borders. Those questions are up to the parties involved.”

Trump’s statement of 6 December 2017, though it is couched in inclusive language (“Jerusalem is today, and must remain, a place where Jews pray at the Western Wall, where Christians walk the Stations of the Cross, and where Muslims worship at Al-Aqsa Mosque”) and a call for a peaceful solution (“This decision is not intended, in any way, to reflect a departure from our strong commitment to facilitate a lasting peace agreement. We want an agreement that is a great deal for the Israelis and a great deal for the Palestinians”) still represents a seismic shift, one that will lead to violence and a dead end for the two state solution.

Response to the decision was largely condemnatory, though there were pockets of praise including that coming from a senior Democratic congressman who had previously voted to impeach the president.

The response from Saudi Arabia was curiously pro forma given that the kingdom’s leadership over several decades has pushed, sometimes only tepidly, for a two state solution with East Jerusalem as the Palestinian capital. True King Salman did speak with Donald Trump before the announcement urging him to reconsider and the Saudis released a statement afterwards calling the move “unjustified and irresponsible.”

However, given that Trump had made it a campaign promise and that there was much recent mood music indicating the move was imminent, and given the centrality of Al Quds to the Palestinian and greater Muslim cause, the response was muted, peppered as it was with statements such as: “The US move represents a significant decline in efforts to push a peace process and is a violation of the historically neutral American position on Jerusalem.”

All of which is to say that the Saudis were undoubtedly tipped off well in advance and that ultimately they were comfortable with the decision.  The statement was a bit of necessary posturing. So why then have the Palestinians yet again been set adrift by their Arab brethren?

The answer, I believe, lies in the aspirational desire of Trump to close “the greatest deal ever” and the relationship between his son in law and senior advisor Jared Kushner and the Saudi crown prince Mohammed bin Salman.

MbS as he is known shares with the Israelis and the Americans a fear of a rising Iran. Donald Trump has for long made clear his contempt for JCPOA, the nuclear deal that is Barack Obama’s only positive Middle East legacy. “Worst deal ever,” is how he describes it. But in order to get the Israelis and the Saudis on the same page in a united front against the Iranians, the Palestine question needs to be resolved.

Kushner and MbS between them, I believe, have discussed the so-called sanctuary plan which would see a new Palestinian state created by combining Gaza with North Sinai. West Bank Palestinian towns and cities now being increasingly encircled by the settlement movement would fall under the jurisdiction of Jordan.  The plan anticipates an exodus of Palestinians to Sinai from the West Bank, Israel and a terribly overcrowded Gaza thus defusing the demographic time bomb the Israelis would face if they declared for a one state solution with equal rights for all, a democracy where Palestinians would inevitably become the majority.

In the sabctuary scenario, then of course it makes perfect sense for Jerusalem to be the capital of Israel with the “undivided” bit coming a little further down the road. And for the players involved, should they pull it off, a great and historic accomplishment. Mohammed bin Salman has big ambitions to become the leader of the Arab world. Donald Trump wants to prove to all and sundry that he is the greatest president EVER. And Jared Kushner? He is a real estate dealer with big ambitions too but like his father in law lacking any expertise whatsoever in the complex world of Middle East politics.

It must have looked simple to Kushner: “Sisi, you have a property and I have tenants that could use that property so with the right financial emoluments (to the tune of several hundred billions of dollars provided by the Saudis) let’s make it happen. You evict the sitting tenants and resettle them west of the Suez and then we will move our people in.” It is a trick that Jared Kushner and his family have played for years in New York. Why not in the Middle East? Why not indeed.

The sanctuary plan is a piece of nonsensical fancy predicated on events that will not happen.  The Egyptian president, already stung by criticism for giving up two tiny islands to the Saudis, is unlikely to give up a big chunk of the Sinai, though he may well want to, given the successes of the Daesh affiliate there. Nor indeed are Palestinians going to abandon their decades long struggle for their homeland to say nothing of Egyptian citizens forcibly relocated. And where oh where are the increasingly cash-strapped Saudis going to come up with the dosh to make this nightmarish dream happen? Will MbS cancel the Neom City project with its $500 billion price tag in order to fund a new Palestinian state? I very much doubt it.

The Trump declaration may well have been the opening gambit in a manoeuvre that is remarkable for both its crass stupidity and its despicable contempt for the people of Palestine, a contempt shared by the Israelis, the Americans and sadly and perhaps most shamefully by the Saudis.