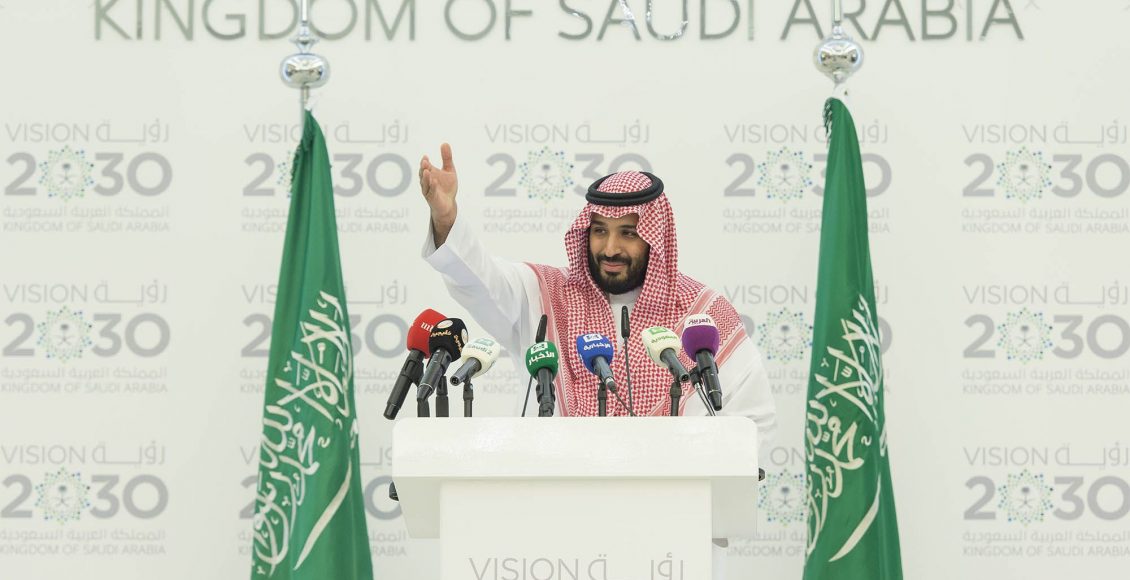 To quote from the original document the core vision is:  “Saudi Arabia: the heart of the Arab and Islamic worlds, the investment powerhouse, and the hub connecting three continents.” And to achieve that vision three themes were promulgated “a vibrant society, a thriving economy and an ambitious nation.”

The first and the third are impossible to quantify so allow me to focus on the second. The Saudi economy cannot be described as thriving, indeed limping along may be more the accurate description.

Indeed the indicators all point to an economy that is slowing dramatically. GDP as a year on year percentage stood at a little more than 4% in 2015. Last year, as oil prices continued their slump that figure fell to less than 2%. Consumer spending was down, a direct result of reductions to a wide range of subsidies and to sweeping cuts in September to public sector workers’ wages and benefits that in some cases amounted to 40% of take home pay. A staggering two thirds of all working Saudis are employed by the government so it is not surprising that consumer spending took a big hit.

There was a huge outcry on social media as the impact of the cuts began to hit home. In mid-April the government responded with an announcement that was as predictable as it was counter-intuitive to the avowed intention of Vision 2030 to restrain government spending while empowering the private sector. The cuts to civil service perks and bonuses were dropped and while he was at it Mohammed bin Salman threw in a two month salary bonus for armed forces personnel engaged in the Yemen war.

The result? A huge increase in the public spending bill while oil hovers at $50 a barrel. The government argues it can afford it, thanks to what it said was: “A number of fiscal adjustment measures taken over the last two years which led to a strong improvement in the fiscal position.”

Well that is one way to put it. In reality, at the first challenge to curbing the kingdom’s hugely bloated public sector, Mohammed bin Salman blinked and beat a hasty retreat.

Long-time observers of Saudi’s numerous five year plans shake their heads and say “we have seen it all before”.  Despite the deputy crown prince’s avowed intention to wean the Saudi economy and its latest plan from the addiction to hydro carbons, oil remains the key.

Vision 2030 was being hatched when oil prices had fallen to as low as $28 a barrel. By the time it was unveiled, prices had rebounded to near $50 where it has hovered ever since. That took some of the pressure off the one key reform that could bring significant change to the Saudi economy: a ruthless culling of the public sector whilst the private sector was energised by, to quote the document, “creating economic opportunities for the entrepreneur, the small enterprise as well as the large corporation.”

Take just one area, affordable housing, that the private sector could and should be actively engaged in. The Financial Times noted that the housing ministry had acknowledged a need for 3.3 million units to be built over the next ten years. That figure represents both a huge opportunity for the private sector and a damning indictment of the ruling family who for decades have looked after themselves and their friends in the business elite while ignoring the housing needs of their citizens. Granted mortgages have been made easier to acquire but if you don’t build the houses you have no need for the mortgages.

And while a tax has been placed on so-called white lands, prime urban property controlled by the royals, or given to their friends, and sitting empty while the value increases, the tax has yet to be actually implemented. Affordable housing requires affordable land but the land upon which those houses could be built continues to stand largely unused.

Mohammed bin Salman as head of the Council for Economic and Development Affairs has the power to open up the white lands but here again he has hesitated, not wanting to alienate other members of the ruling family.

He is also the boss of Saudi Aramco. As part of his plan to fundamentally change the way the Saudi economy functions, the deputy crown prince has placed great emphasis on selling up to 5% of the hydrocarbons giant. He reckons that Aramco is worth somewhere in the neighbourhood of US$2 trillion. But industry experts are not convinced and are putting the figure at between $1 trillion to $ 1.5 trillion. And if the experts’ assessment proves right, there is a big hole in revenue that is supposedly earmarked to prime the private sector pump.

King Salman’s favoured son wears one other hat. He is the Saudi defense minister and the person most responsible for the war in Yemen which is costing the Saudis billions, to say nothing of the horrendous impact on the people of Yemen.  In April last year in an interview with Bloomberg he spoke of “significant progress in negotiations,” adding “we believe we are closer than ever to a political solution.” One year on and there is no political solution in sight while the bombing campaign and a naval blockade continue to wreak havoc on one of the world’s poorest countries.

Time will tell if the lofty ambitions and the eloquent rhetoric of Vision 2030 will deliver the sort of transformation Mohammed bin Salman no doubt sincerely believes his country needs. But one year on and counting, scepticism is growing about the young prince’s ability to turn rhetoric into action.

* Bill Law is a Middle East analyst and a specialist in Gulf affairs. He tweets @billlaw49.