Saudi Arabia and the United Arab Emirates after Five Years: What the Economy Earns, Politics Wastes 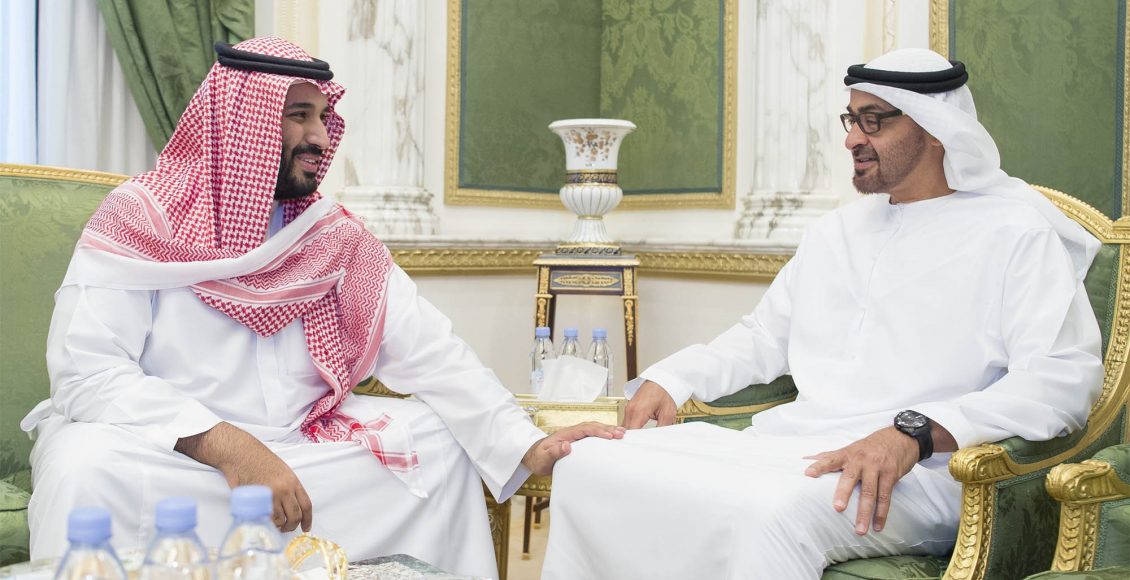 On July 3, 2013, General Abdel Fattah al-Sisi removed the Egyptian elected president Mohamed Morsi. The Minister of Defense then, and the current President suspended the provisions of the constitution and declared chief justice of the Supreme Constitutional Court, Adly Mansour, as the interim president of Egypt. On that day, a new alliance between Saudi Arabia and the UAE was forged in the troubled and warring region, making its first appearance as the extraordinary success in Egypt manifested in a military coup backed by a popular, influential lever.

On June 6, 2018, Abu Dhabi Crown Prince Sheikh Mohammed bin Zayed Al-Nahyan and the Saudi Crown Prince Mohammed bin Salman chaired the first assembly of the Saudi-Emirati Coordination Council. The meeting yielded the signing of 44 joint strategic projects under the banner of the ‘Determination Strategy’ which will be formulated by 350 officials and 139 governmental, sovereign and military bodies of the two countries.

Several local and regional changes accompanied the five years that followed after the birth of the Saudi-Emirati alliance. First, dramatic changes in the Saudi ruling institution overthrowing Prince Muqrin bin Abdulaziz and Prince Muhammad bin Nayef bin Abdulaziz. Eventually, everything was settled in June 2017 with the appointment of Mohammed bin Salman as the crown prince. Second, the war on Yemen in March 2015, and finally, the Gulf crisis in which the Saudi-Emirati alliance, as well as Bahrain and Egypt, took part in. The target was Qatar, the prominent regional player since 1996. The alliance began to cut off political and economic relations with Qatar in June 2017 and imposed a blockade on Qatar. The Crisis was on the brink of military intervention as confirmed by the Kuwaiti mediator in Washington.

The newly-formed Saudi-Emirati Coordination Council represents an economic integration between Saudi Arabia and the UAE of more than one trillion dollars. The exports of the two countries are close to $700 billion while the imports reach approximately $550 billion. Additionally, the financial investments and the sovereign wealth funds – which are the largest in the world – have allowed the two countries to play an exceptional role in the region and influence the decision-making in Washington. The US president Donald Trump has confirmed that his foreign policies are moving according to explicit and declared economic calculations.

The coalition has managed, so far and through the billions spent by Riyadh and Abu Dhabi, to maintain the stability of the regime in Egypt, the most important ally in the Arab world. Political capital has also provided significant breakthroughs on more than one level and in the face of more than one of the decision-making capitals in the region. In Iraq, through an alliance with Sayed Muqtada al-Sadr to confront Iran and in Sudan where the coalition managed to make limited progress over Doha’s influence in Khartoum.

Although the political ascendancy supported by the exceptional financial solvency of the Saudi-Emirati coalition has secured and provided both Riyadh and Abu Dhabi with wider spaces to meddle in the regional political and military files alike, it has been unable to resolve any of the open files. Sana’a is still rebellious to the forces of the president Hadi Mansour and the Saudi-Emirati allied forces. Iran continues to maintain and reinforce its geopolitical influence in Syria, Yemen, and Iraq. Finally, Doha continues to manage its political crisis with the blockading countries successfully, achieving diplomatic and political breakthroughs despite the financial losses it incurred. More importantly, Qatar is leaning on two big regional supporters in the face of Riyadh and Abu Dhabi, the strategic ally (Turkey) and the new ally (Iran). Besides, Doha is still one of the most important political players regionally in Libya and Tunisia, where both Riyadh and Abu Dhabi unsuccessfully attempted to win a new cost-effective but highly-influential victory.

The changes in the Saudi ruling institution affect the Saudi-Emirati alliance exceptionally—sometimes positively and sometimes negatively. Despite the many opinions/allegations that Abu Dhabi plays a pivotal role in the process of reshaping and building the new Saudi state, this change – without the part of Abu Dhabi – was expected sooner or later. The real contingency in this change is its form, tools, coherence, essence, limits, and domains, not its existence as an expected and necessary event.

The young Prince Mohammed bin Salman has succeeded in presenting himself as the leader of the renewal and the modernization stage of the old kingdom, especially with the bold reforms, including dismantling the historical association with the Wahabi religious institution, allowing women to drive and attend soccer games, opening movie theaters and organizing concerts extensively. These reforms, however, were also accompanied by the usual severity and harshness of the traditional state’s apparatus treatment of other files, including political freedom, freedom of expression, and human rights work in the country.

While Abu Dhabi seems more contented with its internal calculations, apart from some challenges on ensuring the political and legal freedoms of the Islamically-oriented Emirates (the Muslim Brotherhood), the complex, intertwined and highly-contradictory Saudi internal calculations affect the direction, priorities, paths, and choices of the Saudi-UAE alliance.

Many studies and specialized articles address what happens in Saudi Arabia as a shift in the state’s direction toward a more liberal and open choice. What challenges these assertions is what appears on the surface so far as a change that lacks the effective theory that lays out for this transformation not only in the aspects of social and economic life but also in the political life in the country. Several questions can be posed about the expected constitutional reforms, political life and the expansion of political participation, the ensuring of freedom of expression. The absence of a clear and understandable political theory of what is happening in Saudi Arabia has significantly contributed to transforming the reform policies into hesitant policies between openness and breaking the taboo on the one hand, and retreat under the banner of maintaining the historical, religious and cultural specificities on the other side. What is between social liberty and empowering women freedom on the one hand, and reluctant recognition of participation and the arrest of women’s rights activists on the other side.

The picture is not entirely bleak; the transformation stage in Saudi Arabia is accredited with the social mobilisation around it and the interaction of the Saudi youth (58.5% of the Saudis under 30 years old and 80.8% under 44) which is considered a significant social lever for this change.

A bold and clear social, political and economic reform program is what newly-born Saudi Arabia needs to overcome this bewilderment. A program that does not overlook or disdain political reforms in the regime to ensure a real and active political participation for its citizens in the process of decision-making domestically and internationally.

The intricacies inside Saudi Arabia, as well as the state of confusion, can be borrowed to evaluate the outcomes and the achievements of the first five years of the emergence of the Saudi-UAE coalition—its mission, aims and aspirations.

While the financial arm of this alliance has achieved several gains and crucial breakthroughs regionally and internationally, the contradictions and differences (of the goal, the mission, and the aspirations) between Riyadh and Abu Dhabi cause conflicting choices and political bets between the two countries in the areas of conflict and intervention. This has always made the coalition unable to translate the gains of the financial arm and the large economy of the alliance into real benefits and influence on the ground.

The models of contradiction and the lack of theory and unity of purpose are numerous. In Yemen, Abu Dhabi relies on Salafist groups and the elements of the Southern Movement while demonizing the Muslim Brotherhood. On the other hand, Riyadh believes that the Muslim Brotherhood is an excellent and appropriate choice to bet on and provide support to, to confront the Houthis. Riyadh clearly rules out a re-alliance with Salafist groups that have any direct or indirect links with al-Qaeda.

In Syria, Abu Dhabi seeks to gradually normalize the Arab relations with Syria while Riyadh maintains its extreme position toward the Syrian regime and its Iranian ally. Things get more foggy and complicated increasingly between Riyadh and Abu Dhabi concerning the Gulf-Iran conflict. Saudi Arabia mobilizes its economic and diplomatic power into a more heated, severe confrontation with Iran. UAE’s banks and ports, however, support the Iranian economy as the alternative gateway through which Tehran runs its international trade and transactions.

The UAE presents its regional policies as a purely secular state opposing the Qatari project which is betting on the democratic transition in the region by gambling on groups of political Islam. This presentation troubles the Saudi-Emirati agreement, especially as Riyadh gambles on the pretext of sectarian war in its direct conflict with Iran. The most iconic paradox is that while Saudi Arabia is invested in conflict with Tehran, Abu Dhabi is lagging behind in the internationalization of the three islands case that the UAE claims Iran is occupying.

To conclude, while the Saudi-Emirati alliance – after five years and with the inauguration of 44 projects by the Coordination Council between the two countries – appears strong and coherent in terms of the language of capital and business, Riyadh and Abu Dhabi are unable to answer more critical and pivotal questions. Why is this alliance? What does it want? And Why are its successes limited to the media through the contracts of armaments and industrial cities without the success of arms or capital in affecting a change in power balances and influence on the ground?