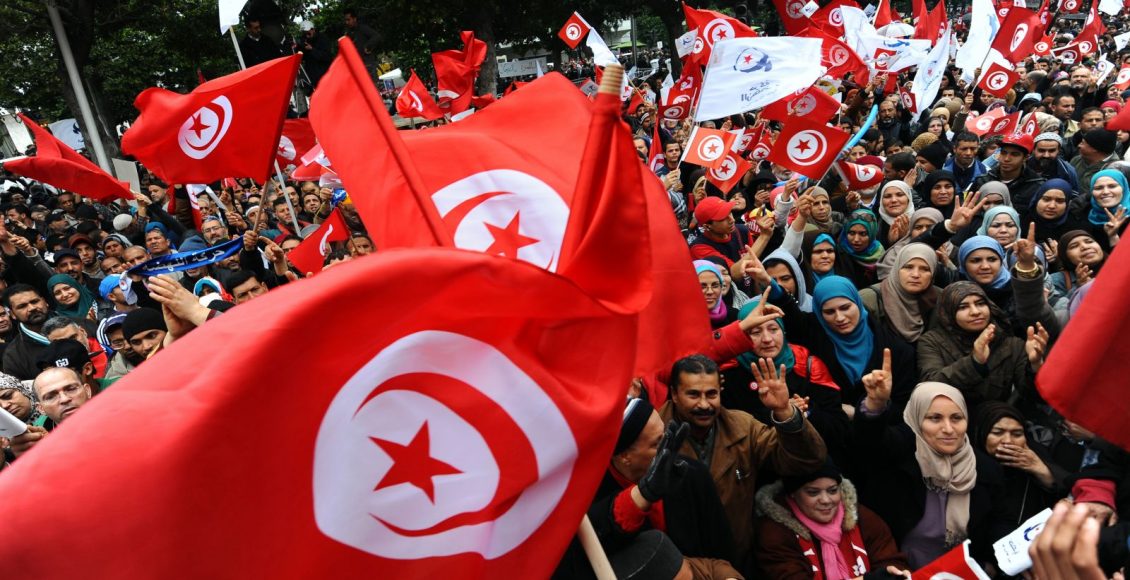 In 2011, Qatar played a prominent role in Tunisia through providing financial and information support to Ennahda Party.

Beji Caid Essebsi did not abide with the United Arab Emirate’s orders to eliminate the Muslim Brotherhood in Tunisia.

The UAE denied Mohsen Marzouk, Secretary General of Nidaa Tounes, an entry visa following a disagreement between the Tunisian party and the Emirate of Abu Dhabi.

Since the revolution of January 14, 2011, Tunisia has witnessed significant geopolitical shifts. The popular movements that contributed to the development of the revolution started to influence and change Tunisian foreign relations. This change has been marked by a shift from a French and American domination on Tunisian presidential affairs during the reign of the late President Habib Bourguiba and the ousted President Zine El-Abidine towards a greater influence on the part of Arab Gulf states, most notably Qatar and the United Arab Emirates (UAE), exerting their influence in conjunction with Saudi Arabia.

The Influence of Qatar through Ennahda Party

In 2011, Qatar played a prominent role in Tunisia, especially during the political rule of Ennahda Party, which Qatar supported in funds and through the provision of information to acquire the majority of votes in the elections of October 23, 2011. Many observers of the election who opposed the Islamist party criticized it of receiving external funds during its campaign.

Far from denying foreign support, President of Ennahda Party Rached Ghannouchi confirmed in an interview with the Qatari newspaper Al-Arab, that “Qatar is a partner in the Tunisian revolution through providing information support via Al Jazeera channel and its encouragement of the revolution even before its success,” adding that “we are grateful for Qatar and its Emir and for its encouragement of investment in Tunisia.”

Indeed, the 500 million dollars that Doha offered for the Troika (Tunisia’s governing tripartite coalition under the leadership of Ennahda) during the visit of the Qatari Emir Shaikh Hamad bin Khalifa Al Thani is considered one of the most significant aid packages that contributed to the economy of post-revolutionary Tunisia, possibly guaranteeing the success and validating the legitimacy of the Islamist-led government. The visit took place in January 2012 following an invitation extended by Ennahda’s president at the time Hamadi Jebali to join Tunisia in its celebration of the revolution’s first anniversary.

The rapport between the two countries, however, soon witnessed a significant decline following a series of political assassinations, targeting Chokri Belaid, Secretary General of the Democratic Patriots’ Movement (February 2012) and a prominent political opponent of Ennahda Party as well as Mohamed al-Brahimi, Secretary General of the Popular Movement (July 2013). Moreover, a growing wave of terrorist attacks against members of the security forces and the national army further escalated the political tension. Ennahda was blamed for the assassinations given that during its first and second political rule, it failed to take deterrent measures against Islamic jihadist groups in the country.

The Influence of the UAE through Nidaa Tounes

Conversations on the involvement of the UAE in Tunisia began in the summer of 2013 when the Emirates extended support for Tamarod (Rebellion), the movement that mobilized the popular demand for ousting the Troika through dissolving the Constituent Assembly and expediting elections. Proponents of the Islamist movement questioned the late involvement of the UAE in the country, firmly assured that the Gulf state is behind the recent political assassinations and that it took upon itself, with the support of Saudi Arabia, quenching the revolutions of the Arab Spring while in their infancy and launching an open war against the Muslim Brotherhood in Tunisia as well in Egypt out of fear that these revolutions might reach and destabilize their governments.

Despite demands for recreating the Egyptian political scenario, the political development in Tunisia did not usher into a military-backed government — due to the nature of the Tunisian political system that separates the military from any political role — but rather in a political front that joined a significant section of oppositionists from the secular and leftist Democratic bloc. This front was represented by Beji Caid Essebsi and his movement Nidaa Tounes.

Indeed, following the victory of Beji Caid Essebsi and his party in the elections of December 2014, Essebsi refused to abide by the Emirates’ orders to eliminate the Muslim Brotherhood in Tunisia as was the case in Egypt and went as far as involving Ennahda Party in a unified national government under the leadership of a president agreed upon by both parties. This political development hastened to end the honeymoon period between the Emirates and Nidaa Tounes, which would have resulted in a fruitful economic cooperation and substantial Emirati investments in the post-revolutionary country. The alliance between the two states have dwindled even further when many of Essebsi’s scheduled visits to Dubai and Abu Dhabi were cancelled, particularly after the political alliance he formed with Rached Ghanouchi. This newly formed alliance adversely affected diplomatic relations between Tunisia and the Emirates, which was eventually manifest in the rejection of UAE visas for Mohsen Marzouk, Secretary General of Nidaa Tounes as well as other leaders form the party who wished to offer their condolences following the death of Sheikh Rashid bin Mohammed bin Rashid Al Maktoum in September 2015.

The UAE justified its decision to deny entry visas for the Tunisian party based on security reasons, pointing to the presence of Jihadist networks among the group that planned to travel into the country. Others have attributed this turn in Tunisian-Emirati relation to a case of embezzlement over real estate deals involving Sheikh Mohammed bin Rashid Al Maktoum, who was summoned to testify in a case brought forth by one of the judges close to the Tunisian Congress for the Republic (the party of the former President Moncef Marzouki).

Why did Nidaa Tounes Refuse to Respond to Emirati orders?

The success of the democratic experience in Tunisia is interpreted by the political circles in the country as contingent upon the great powers of Europe and the United States of America for the alliance between Ennahda Party and Nidaa Tounes was a result of foreign dictates. In forming such an alliance, the hope is to realize a democratic state even if Tunisia remains a single case after the failure of the Arab Spring experiences in other countries such as Libya, Egypt, Yemen, and Syria; and should the democratic experience fail, the objective is then to use the new circumstances for political, strategic, and economic ends.

Since the outbreak of the Tunisian Revolution and upon the rule of King Abdullah bin Abdul Aziz Al Saud, Saudi Arabia has taken a cautious position on the Tunisian revolution, especially when its effects reached the Gulf region and in particular the Kingdom of Bahrain on February 14, 2011. Responding to the political unrest in the Gulf, Saudi Arabia was a leading military force in the “Peninsula Shield Force” that was mobilized to suppress the Bahraini revolution in its cradle.

The close friendship between the former Tunisian President Zine El Abidine Ben Ali and Prince Nayef bin Abdul Aziz, the former Saudi interior minister, who provided asylum for Ben Ali after fleeing from Tunisia in January 2011 was the main reason for the strained relations between the first Troika and Riyadh. Indeed, President of Ennahda Rachid Ghannouchi did not schedule any official visit to Riyadh following his statement to the American media that “Saudi Arabia is threatened with an Arab Spring revolution.” This also explains the lacklustre welcome to which the Tunisian Prime Minister Hamadi Jebali was treated during his first visit to Saudi Arabia in 2012.

Followers of Islamic movements contend that during the reign of King Abdulla, Saudi Arabia classified Ennahda Party as part of the international Muslim Brotherhood movement. From this perspective, Ennahda is regarded as a hostile movement that is similar to the Muslim Brotherhood in Egypt. However, when King Salman bin Abdul Aziz ascended the throne in 2015, Rachid Ghannouchi, along with senior members from Ennahda Party, paid his first visit to Saudi Arabia. The visit was an attempt to break the ice between the party and the Gulf kingdom. Indeed, with the emergence of new developments in the geopolitical map of the Middle East, the Muslim Brotherhood became less threatening to the Saudi Kingdom, representing a Sunni front against the growing role of Iran in the region and the threats of Islamic Sate of Iraq and Syria (ISIS).

The shift between cooperation and alliance-building, on the one hand, and conflict and hostility on the other has been the main feature that characterize the relation between post-revolutionary Tunisia and the Gulf states, in particular Qatar and the UAE. A successful assessment of this relation, however, requires an understanding of the position of Saudi Arabia on the Tunisian revolution as well as of regional political developments. As Ahmed Ounaies, Tunisia’s former foreign minister and expert on international relations for radio Sun FM, stated in September 2015, “Tunisia’s relation to the Gulf countries will generally remain contingent on solving the Syrian crisis.” It is evident that the regional and international political developments experienced by the region today will open up possibilities for transformative political alliances as well as new economic and strategic interests in a manner that will produce far-reaching effects for the Arab geopolitical map, including Tunisia.