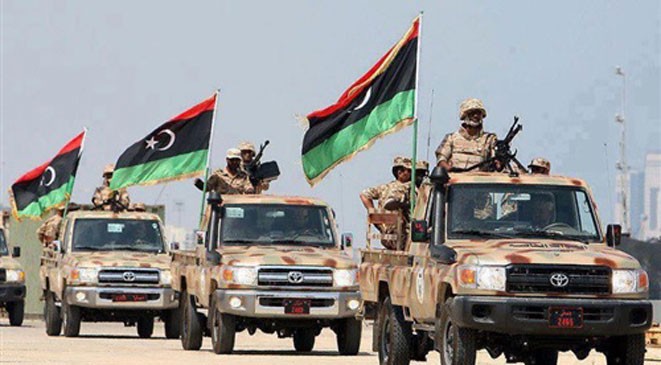 Qatar has supported Fajr Libya Militia, the representative of the Muslim Brotherhood and pushed hard to form a government under its leadership.

Emirates appointed UN envoy to lead the national dialogue sessions as director of the Academy of Diplomacy with a salary estimated at 35 thousand pounds.

Qatar played a strategic and military role with the North Atlantic Treaty Organization (NATO), led by France and the US to overthrow the rule of Muammar Gaddafi. It grew the country’s influence in the region after the revolution of February 17 by arming the rebels in Libya with ammunitions, equipment and logistical support for the political leader of Fajr Libya, Abdelhakim Belhadj, considering the international bet then-was set toward the direction of the Islamic political movements in the region.

What has fueled the Qatar’s influence in Libya was its support to Fajr Libya, the representative of the Muslim Brotherhood movement in Tripoli and not to mention pushing hard to form a government led by the political party. During the emergency meeting of the Council of the Arab League regarding the crisis in Libya in August 2015, they rejected Arab military intervention as a solution to this crisis fearing to lose its regional weight in Libya.

However, UAE extended its influence in Libya through its support to the retired Major General Khalifa Haftar with money and weapons to undermine Fajr Libya and to support the internationally recognized Parliament of Tobruk to take over the reins of government in Libya. It is noteworthy that the United Nations had condemned the reports of violations of the arms embargo operations in Libya through the smuggling of weapons and fighters across the Egyptian gate in March 2015.

UAE’s support for Haftar contributed to the obstruction of ways to reach a political solution or agreement between the Libyan political parties that refuse to let Haftar be part of the formation of the next government of Libya.

There were also reports regarding the “suspicious” role of UAE in the Libya through co-opting the UN envoy, Bernardino Leon, to lead the national dialogue sessions, who was appointed the director of the diplomatic Academy with a salary estimated at 35 thousand pounds to support its foreign policy. This led some of the conflicted parties in Libya to question the fairness and impartiality of the UN special envoy and the United Arab Emirates, being one of the main parties in the regional conflict in Libya. He deliberately formed a political plan aimed at supporting the backed Tobruk Parliament which contributed to disrupting the national dialogue.

The Gulf countries and the future of the Libyan dialogue

The Libyan crisis represented a decisive turning point in the Arab and regional policy. Voices rose up in Libya in order to form the solution internally. Several readings of the Libyan affair found the intervention of the Gulf states in the Libyan crisis to be a strategic error and that contributed to igniting the fire of strife between the political parties.

In front of the widening gap between the conflicted parties in Libya as well as the existence of armed terrorist groups affiliated to ISIS, it threatens the security of the region. the President of the United States Barack Obama stated in April 2015 that his country’s attitude regarding the Libyan crisis by declaring that Washington fears the faltering of the Libyan national dialogue. He encouraged the Gulf States that have influence on the various factions in Libya to pay more toward solving this crisis. He gave the green light for Qatar to be part of the solution and not in conflict by virtue of its close ties with one of the parties, Fajr Libya.

This explains what is stated in the letter Tamim Bin Hamad Al Thani in the seventieth meeting of the session of the General Assembly of the United Nations in late September 2015, which sought to declare an official position of the Libyan crisis that consider the national dialogue to be the “only strategic choice which will bring together all the political parties in Libya and will help reach a peaceful political solution to restore stability and security and development.”

Fearing of recreating the Iraqi scenario in Libya, it seems to be unavoidable for the Gulf States to strive to cooperate with Libya’s neighborhood, especially Algeria in order to bring visions together between the parties of the conflict to find a rule a compromise a formula similar to the Tunisian model to avoid civil war. On the other hand, the protection of oil market and supporting the Libyan government to get rid of the terrorist groups was above all in order to gain economic interests.

Actually, the geo-political conflicts between the Gulf countries have fueled the crisis in Libya and was the direct cause of the aggravation between supporters of political Islam and supporters of military rule. The fate of Libya’s stability depends on the compatibility of these dominated Gulf actors on the political spectrum in Libya.

The Libyan national dialogue can only work successfully if the dialogue between Qatar and UAE succeeded first.