The issue is more than just “domestic violence” 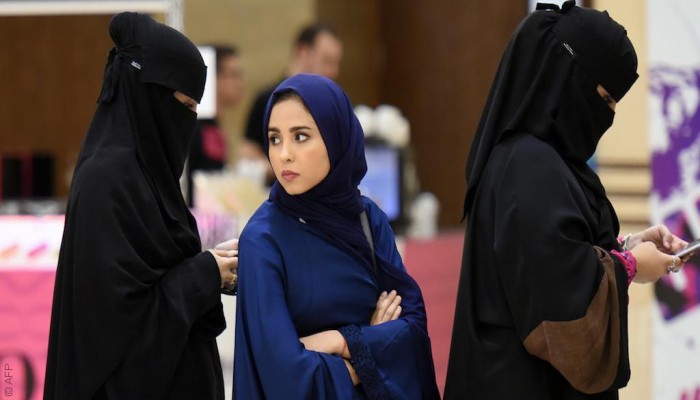 the idea of “fleeing” from their homeland comes to mind for many girls in the Gulf, but that does not mean that they have a serious intention to leave. They talk to themselves about it and contemplate the desire of “salvation” at least once in their lifetime. This makes us wonder: Why do Arabian gulf women have the idea of leaving in their minds? Why are some Gulf women already had to make such a difficult decision? What are the political and social changes that Gulf women need in order to obtain safety in their homeland and do not need to leave, or even think about such a tough decision like seeking asylum?

Why do gulf women seek asylum in the west?

We can divide the reasons for the Gulf girls leaving their homelands into two main reasons, social and political. It is a division related to the types of asylum in the western countries themselves. “Humanitarian” and “political” asylum, however, does not preclude the two causes from coming together in one case.

The humanitarian asylum causes are taking shape and continuing because the law in the Gulf states does not stop the human rights violations against women. Domestic violence is – but is not limited to – a social crime that occurs under the protection and welfare of state laws. In this context, we can imagine a country in which the legislator permits acts of theft, can we stand against the theft – which is ethically “wrong” in Kant’s terms – in such a scenario? Can we return what was stolen to their owners if the law in the country is legalizing theft? Can we even achieve “justice”? Accordingly, the full responsibility lies with the legislators, even if the perpetrator of this violation is a societal component.

In Qatar, “marital rape” or “domestic violence” is not a crime in violation of Article 57 of Law No. 22 of 2006 on the Family and Personal Status, which prohibits husbands from physically or emotionally abusing their wives and general provisions relating to assault, the Human Rights Watch report can be reviewed 2018.

Likewise, in other Gulf states that are compatible with the State of Qatar in such laws, there is no strict and clear law criminalizing this violence, and therefore, domestic violence is one of the most important reasons for girls seeking refuge abroad. This violence, while it was caused by “false” social behaviors, but the absence of laws and legislations that defends the dignity of women is what contributes to the spread of this violence, and it even passing on from one generation to the other  generation.

Gulf women seeking Asylum is not only a family related problem.

The allegations that the refugee situations of Gulf girls stem from “family” problems, and has nothing to do with the laws of the state represent an unjust and wrong understanding of the reality of the suffering of Gulf women. Often these allegations are made as a matter of “rivalry” and “crude” courtesy of the state by denying the lived reality and exonerating policymakers. Demonizing these women asylum seekers, and trying to silence them or distort their claims, which is a very naive attempt done only to draw the attention away from the problem, instead of trying to understand it in order to find appropriate solutions to it.

In addition to the absence of laws criminalizing “violence”, the rest of the laws in the Gulf countries are in a discriminatory manner against women, the laws are based on the principle of “male guardianship” over women. In Qatar in particular, Qatar is still the only Gulf country to require a woman under the age of twenty-five to obtain a travel permit, and comes after Saudi Arabia removed the permits of last year’s public travel. Likewise, the request for “approval of work” status given by the man, which constitutes a violation of Qatar’s signature of the Convention on the Elimination of All Forms of Discrimination against Women (CEDAW). It is the agreement that Gulf states place on “reservations” for reasons that it says relate to religion and social norms.

With regard to political asylum, we must pay attention to the policies and practices of political tyranny of the Gulf authorities towards Gulf women political activists and human rights activists who are subject to prosecution, being a target and imprisonment, and many of them were forced to choose asylum abroad.

Today, there are many inspiring Gulf women activists in exile. This deserves focus and attention, as Gulf women were not exempt from being a targeted victim by the authorities in the Gulf states.

The patriarchal system that dominates all aspects and stations of women’s lives in the Gulf states (education, work, housing, and marriage) is the cornerstone of gulf women motif for asylum, the fear of both the social authority and symbolic and physical violence. This is what causes women in the Gulf states to be less efficient compared to men when it comes to their part as a citizen, second-class citizenship, as they have no decision, no independence, and no rights.

The majority of Gulf societies place women in a broken mold, incomplete in eligibility and dignity, where the girl is raised on a pattern different from the boy, and where she is gets “ready” and “prepared” to accept this “image” that the male collective mind demands and wants in these societies. Otherwise, she will face abuse, whether it is a physical or emotional one.

The religious establishment is one of the most important factors in perpetuating this culture, which undermines the dignity of women and which increases social harm to them. The Sheikhs of money or “preachers of  the Sultans” as Dr Ali Al-Wardi – calls them play the role of the legislators,  and their preaching is the justification tool for the various social policies and customs in the Gulf states.

Some Muslim religious scholars try to reinforce the woman’s “inferiority” and weakness, and even demonization. However, it cannot be ignored that there is something like “awakening” in the Gulf, and that this progress was able to bring about a change in the Gulf collective mind and its view of women, and how to deal with it, but it is a slow-moving and limited-impact “awakening”.

The priority for the Gulf states should aim to review the cases of girls’ asylum abroad as a wake-up call. And to understand that the real solutions are in accepting and initiating social and political changes that guarantee the alterations of the conditions of women, so it is the duty of the “homelands” to be the safe haven and the first real country of asylum.

What Gulf women expect, both inside and outside our country, is a fundamental and real reform of all state legislations to ensure that the state respects the freedom and rights of all its citizens, women and men alike. It is that we achieve the “state of citizenship”, where the state reserves the freedom and rights of the individual, that is to achieve and respect all the articles of the constitution that call for the equal rights of male and female citizens. What Gulf women expect is for the political systems in the Gulf to truly believe that there is no prospect for a developed civilized society in the event that women continue to be treated like “minors”, who live with defenseless citizenship and with imperfect dignity.

In fact, to the extent that the options of Gulf women in immigration or asylum may appear confrontational, they have their own contexts and experiences, insofar as they mean that they are an attempt to reveal a social imbalance that must be subject to discussion, and to propose reforms that the state should legislate with, in order to guarantee the woman’s right to Equal citizenship and full rights. Here, asylum is nothing more than a serious and mature attempt to work on social and political change.

Qatar and CEDAW: a “signed” agreement and a “disabled” application