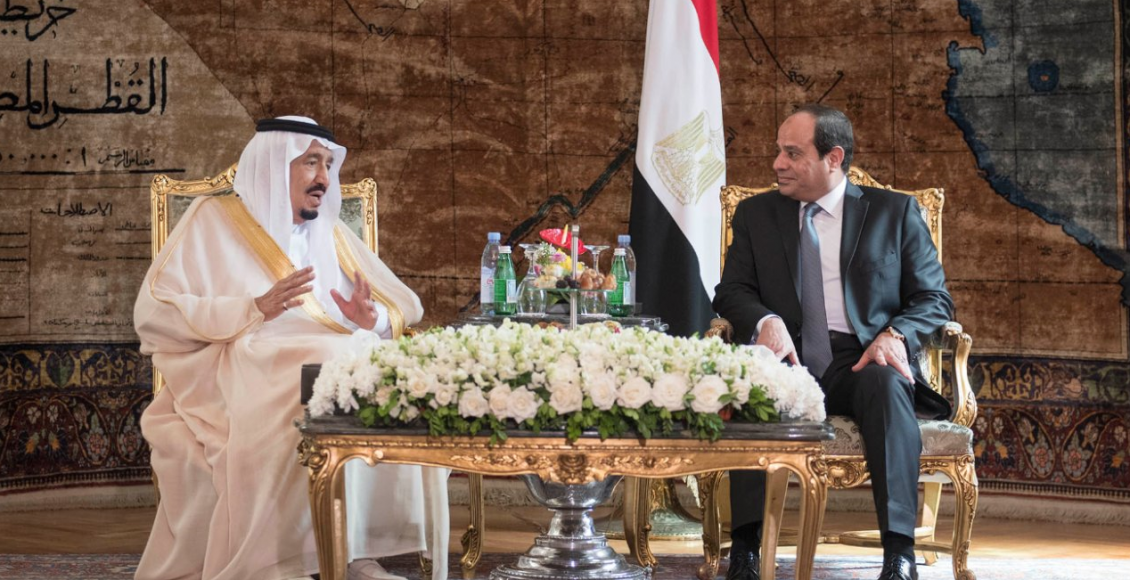 The idea of a bridge linking Egypt and Saudi Arabia was first proposed 28 years ago but did not make it past the planning stage until April 2016, when the project was revived in the framework of bilateral discussions between Egypt and Saudi Arabia and during parliamentary debates in Egypt. According to some sources, the Egyptians were initially reluctant to build the bridge, especially after the ousted president Hosni Mubarak had expressed concerns about the effect of the causeway on tourism in Sharm el-Sheikh and the tranquility of the area as a whole. Today, however, the Egypt seems eager to build the causeway, which is to be named after the current Saudi ruler King Salman. This change in the Egyptian position has been attributed to expectations of increased economic returns and a more robust touristic and maritime relation between the two countries. Indeed, both parties expect that following the completion of the bridge, which is scheduled in three years, trade relations, tourism, maritime activities, and the movement of pilgrims will significantly improve between them by cutting the Saudi-Egypt commute to 20 minutes only. This article seeks to explore the regional implications of the construction of King Salman Causeway in the context of changing Egyptian policies.

The announcement of King Salman Causeway coincided with the re-demarcation of the border between Saudi Arabia and Egypt, which resulted in the Saudi purchase of Tiran and Sanafir islands. The particular timing of the project has had a major impact in encouraging Egypt to change its attitude and agree to the establishment of the bridge. Indeed, the transmission of Tiran and Sanafir to Saudi sovereignty limits Egypt’s ability to control maritime activities in the Strait of Tiran. This has been a source of concern to Israel, which implied evoking Camp David Accords should the plan to build the bridge commence and affect its operations in the strait. However, the Saudi ownership of both islands positions Saudi Arabia as a third party in the 1979 Peace Treaty between Egypt and Israel, which mentions both Tiran and Sanafir in its clauses. As such, Saudi Arabia is compelled by the treaty to formally recognize Israel and normalize its relation with it. As such, the entry of Saudi Arabia in the Peace Treaty constitute a political gain to Israel as it limits the ability of both Saudi Arabia and Egypt to interfere in Israel’s maritime activity in the strait. In addition, the fall of the Brotherhood in Egypt and the new regime’s attempt to combat terrorism internally through garnering regional and international support have made a military cooperation with Israel necessary. This lessens Israel’s fears of being controlled or harmed by either Egypt or Saudi Arabia.

On a different hand, shifting geopolitics in the region has played a significant role in changing the Egyptian position regarding King Salman Causeway. Most important of these are the ongoing Syrian civil war, the growing threat of religious extremist groups under The Islamic State (ISIS), and the expanding Iranian influence in Iraq and Syria. Indeed, with the rise of ISIS, Egypt has found urgent the establishment of regional, if not international, alliances to defeat and mitigate the impact of the extremist militants on its internal security. Building a bridge between Egypt and Saudi Arabia will contribute towards this end by deepening relations between the two countries and enhancing future possibilities of cooperation to counter the threat of ISIS in the region. In addition, as armed conflict escalates in the Sinai stripe including the killing and kidnapping of Egyptian soldiers by ISIS militants for more than a year and the military presence in the area weakens, it has become necessary for Egypt to fortify its relation with its neighbors, especially those providing political and financial support following the fall of the Brotherhood. This will enable the new regime to address its security challenges more effectively, drawing on external support and securing regional and international legitimacy in its efforts for greater stability.

As Egypt seeks to enhance regional cooperation, Saudi Arabia is also in need for a regional ally that shares its political interests and position regarding Iran, which has become a serious threat to the kingdom since the outbreak of the Syrian revolution in 2011 and its escalation to a devastating civil war. Despite the fact that Iran was classified as part of an axis of evil by former U.S. president Bush the son, it has played an active role in Iraq by supporting political groups that follow sectarian policies as well as backing armed militias since the US occupation of Iraq in 2003. As armed conflict in Syria erupted, the influence of Iran has continued to expand, posing a greater threat to the Saudi kingdom.

Indeed, with the election of the Obama administration, its less hostile attitudes toward Iran, and its reluctance to intervene militarily in the region, the political factors that checked the role of Iran have minimized. This was especially the case after the U.S. signed an agreement with Iran on its nuclear program last year and lifted all previously imposed sanctions on the country. This changing U.S. position coupled with its hesitation to intervene in Syria offered an opportunity for Iran to secure a greater presence in the region as it joined Russia in combating ISIS militants. The new Iranian role has worried the GCC council, especially Saudi Arabia which saw the urgency of establishing regional cooperation as a defence mechanism against the growing influence of Iran following the decline of the U.S. role in forming a defence shield for the gulf with the Obama administration. Given these circumstances, Saudi has sought to expand its circle of regional allies, including Egypt, Turkey, as well as Qatar. In light of these regional alliances, it is likely that the Saudi-Qatari dispute over the role of the Brotherhood in Egypt will find a way to a resolution despite the fact that this disagreement has had a negative impact on the political and economic relations between the two countries. In addition to possibly solving the dispute with Qatar, Saudi Arabia seeks to reconcile differences between Egypt and Turkey due to Turkey’s strategic, military, and political role in countering the influence of ISIS in the region. Indeed, Turkey represents an important ally for Saudi Arabia especially given its political and institutional ties with Israel and the U.S. through NATO. As such, the Saudi regime finds it incumbent to reconcile regional conflicts and fortify its circle of supporters.

As an example of the success of the current Egyptian regime and its effort to enhance the country’s economic situation, King Salman Causeway represents a political and regional gain for Egypt and Saudi Arabia, especially in light of shifting regional geopolitics that has urged both to reconsider their policies, forging regional alliances, and securing a greater influence on the region and its stability. Despite the fact that the ousting of Mubarak was a major loss for Saudi Arabia, the rule of alSisi following the fall of the Brotherhood represents an opportunity for the Saudi Kingdom to regain its Egyptian ally. Through extending a bridge between the two countries, a regional alliance will be easier to maintain, enabling both countries to limit the influence of ISIS and counter the role of Iran in Iraq and Syria.

Lecturer at the Faculty of Economics and Political Sciences, Cairo University

Turkey and Gulf Countries Positions towards the Syrian Conflict