Riyadh – Tehran: From Rivalry to Enmity? 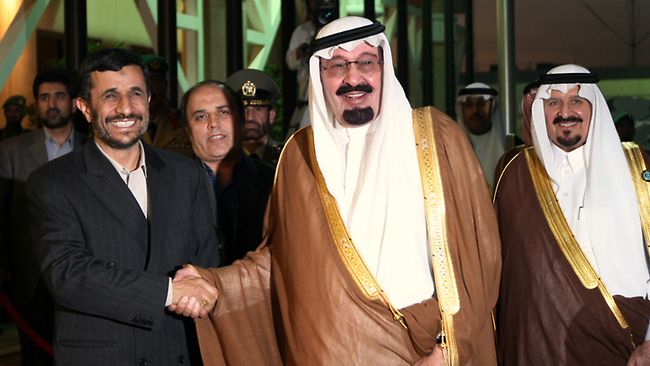 With the so-called “Arab Spring”, the players stopped their disguise and cards were laid bare in the conflict zones

ُspecially so with ongoing crises and raging political and security fronts in Syria, Yemen, Iraq, Bahrain, and Lebanon as well as the escalation of the media rhetoric.

Many fear that the rivalry between Saudi Arabia and the Islamic Republic of Iran would turn into hostility whose results could be catastrophic for the region.

Since the events of (Mina) in the last (Hajj) pilgrimage season and in spite of the notable media discourse escalation, the diplomatic movement is active between the two rivals in more than one area, in a race against time to contain the strained relationship between the two largest countries in the region to avoid allowing this crisis reach the point of no return. The two countries are reconsidering their relationship with an accelerated pace even if the statements made by the officials on both sides do not suggest so.

Many observers believe that this reconsideration of the relationship between the two countries comes after more than three decades full of big events and rapid transformations in the Arab world and in Iran. These major events tangled the interests of Iran and Saudi Arabia with those of the big players. The Gulf War I, which lasted eight years (1980 – 1988) followed by the Iraqi invasion of Kuwait (1990), then Gulf War II, that ended with the liberation of Kuwait and the imposition of the embargo on Iraq (1991), and the events of New York (2001), which was followed by the invasion of Afghanistan and Iraq, leading to the so called revolutions of the Arab Spring (2011). Both Iran and Saudi Arabia took part in these events. Saudi Arabia hosted the US forces in the Gulf for a long time and helped to liberate Kuwait. Iran offered at least intelligence cooperation to overthrow Taliban in Afghanistan and the Baath regime in Iraq, and reinforced its influence in Palestine, Syria and Lebanon

And despite of the new challenge that faced Iran in the nineties after the collapse of the Soviet Union and the emergence of new countries, with new alliances on its northern borders in Central Asia, Iran was able to deal with Arab world with sufficient flexibility. Also, it was able to use the new developments in Iraq and Afghanistan to strengthen its regional role after it got rid, without waging any war, of its two bitter rivals: The Taliban and the Iraqi Baath regime. The question now is: what brings together Saudi Arabia and Iran in the aftermath of these significant events? Would the three decades feud turn into enmity resulting in an armed conflict over regional dominance between the two opposing countries? The answer to this question dictates the consideration of few cases of agreement and tension between Iran and Saudi Arabia since the victory of the Islamic Revolution in 1979 until Rouhany’s rule. The first phase, which began after the return of Imam Khomeini to Iran, was a harsh dispute period because Riyadh has stood by Baghdad throughout the years of the Iran-Iraq war, and paid dearly for this support. Later, pilgrimage seasons became time bombs threatening the already strained relations with Mecca events of 1987 highlighting the peak of their discord especially that the Islamic Republic was accused of attempting to export the revolution to the rest of the Gulf States.

After the end of Gulf War II (1990 – 1991), some developments drove the bilateral relations from the womb of the eighties to the early nineties signaling the beginning of a different era. At that time President Hashemi Rafsanjani and later Mohammad Khatami succeeded in establishing relations with neighboring Gulf countries, topping the list Saudi Arabia, the two leaders led a drive to normalize the relations between Iran and the Arab world while simultaneously adopting a policy of openness to the rest of the world under the “dialogue of civilizations” motto.

The result of this openness was a high degree of cooperation and coordination between Saudi Arabia and Iran the trophy of this cooperation was the signing of a security accord in 2001. The accord represented a historic turning point between the two countries. But, the arrival of Ahmadi Najad to the presidency in 2006 brought back tensions as it restored the atmosphere to the era of the eighties and placed a strong pressure on the legacy of the presidencies of Rafsanjani and Khatami, which were mere cold intervals in an otherwise highly tense era thanks to continuous availability of dispute causes. The renewed tension reinforced the role that Iran plays in Syria, Lebanon, Iraq and its growing armament and nuclear program. Subsequent signs of the two countries drifting apart became evident most markedly when the Saudi diplomacy, known for its tradition of tactful discretion and its backstage policy, launched a strong drive to redraw the map of the conflict in the region.

The counter attack of Saudi Arabia was manifested in few explicit reactions for example in the Iraqi case Riyadh issued a direct warning to Tehran calling on Iran to give up what Saudi Arabia described as the “Iranian efforts to spread Shia ideology in the Arab world” and supported this warning with hosting a conference for all Sunni scholars in Iraq, while keeping a keen eye on the influence of Iraqi Shiites on the situation in the eastern region of the Kingdom.

In the Palestinian file, Saudi Arabia sent a strong message via the late King Abdullah stating that Palestine was an Arab issue and should be solved by Arabs only. The “Mecca agreement” (February 2007) in all of its political and financial contents was a practical translation of this stance as it sought to block the Iranians from fostering the Palestinian government which was led then by Hamas

The characteristic of the new stance of the Kingdom became evident in the Lebanese file, when Saudi Arabia recognized that the Lebanese opposition had an Iranian reference, the Kingdom sought within this context to defuse the sectarian conflict in collaboration with Tehran, these efforts were manifested in the visits by Ali Larijani to Riyadh and Bandar bin Sultan to Tehran. In parallel to the aforementioned, Saudi Arabia continued to express concerns about the Iranian nuclear program in spite of Iran’s efforts to reassure the Gulf States in relation to the program.

However, the crisis increased in complexity and developed even further when the so called Arab Spring Revolutions started in February 2011 giving rise to new tension causing issues that aggravated the tension between the two countries, leading to escalation and revealing the depth of the crisis between them. This in its turn has forced the players to reveal their cards in the regions disputed between them. Tehran refused the invasion of Saudi troops to Bahrain in 2011, refused the Saudi attempt to topple the regime of Bashar Assad in Syria and demonstrated a practical response to the attempt, and rejected the war on Yemen.

However, in light of this complexity and escalation in rhetoric, the two sides kept a string attached as both of them realize that if their rivalry turned into animosity and then to an armed conflict it will lead to a frightening and terrifying catastrophe for the Islamic world, and the loss will be experienced by all.

Both parties are aware that the Saudi- Iranian relations, despite the efforts to avoid enmity in this rather difficult era, are strategically influenced by the developments in the zones of confrontations between the two countries in Syria, Yemen, Bahrain, and Lebanon.