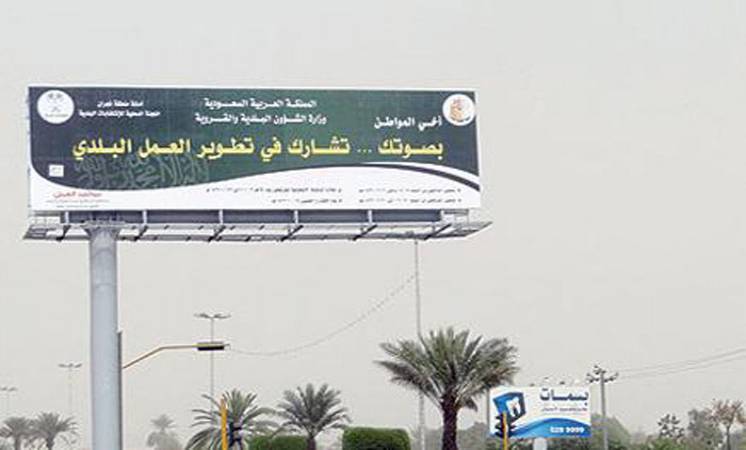 Election of the full number of the municipality council members and setting the quota to ensure women’s membership in the councils.

The Municipality Elections Decision was issued in 2004, coinciding with the introduction of a set of reformative initiatives including the launching of the National Dialogue Initiative and the establishing of Rights Organizations in the Kingdom. The election attracted immense public and international attention because it was the first public election approved in the Kingdom after a number of decades.

The elections of 2004 created ample room for different forces and movements active in the Saudi society to interact with the elections despite the prohibition of forming partisan blocks and groups as well as the reservations of some conventional religious groups against participation in the elections.

Thanks to the reformative initiatives introduced then, the elections led to wide public interaction and participation never to been seen in the country in the subsequent elections rounds. The elections were conducted in very competitive environment between the different participating parties because they were perceived as the beginning of a comprehensive reformative drive.

The councils involved in supervision and reporting on municipality work introduced, throughout the first four years of their activity, tens of programmes, projects, and developmental plans in the secretariats and municipalities.

Notable obstacles became evident in the implementation of the old law which was not relevant to the needs of the current times including that the said laws granted the executive administrations i.e. the municipalities, the veto right against decisions taken by the council and the power to refer those decisions for further discussions. The disputed decisions are to be referred to the minister in case of no agreement. Furthermore, the head of the executive body has the right to become the chairman of the municipality council i.e. to become the head of both the executive body and the council simultaneously, which led to a contradiction in the practical conduct of the municipality councils.

As for the nationals, they started to feel the weakness of the role played by the municipality councils in terms of their ability to impact the policy, programmes, and activities of the municipalities and to tackle their corruption or reform their structures and effectively supervise their conduct. This frustration was manifested in the gradual withdrawal from the nationals’ engagement with the councils and fading of their excitement.

And given the delays in approving the new charter of the municipality councils, the term of the councils was extended for two more years, which ended in 2011 instead of the supposed end of term in 2009.

However, and despite the extension, the two years passed without the approval of the new charter and a decision was taken to hold the second round of municipality elections in 2011 based on the old law of 1977. This led to a sharp decrease in the number of nationals approaching the polling stations leading to a notable drop in the participation percentage relative to the first round.

The second round of municipality councils’ elections (2011-2015) was weak and poor in every standard as members became less keen on proactive reviewing, following up, and examining serious projects and programmes. The role of nationals became largely limited leaving the room for the executive bodies to direct and lead the municipality work

Naturally, this impacted the engagement of nationals with the current round of elections, the 2015 elections, to which the registration of candidacy started a month ago. The candidacy registration continues to be weak despite the significant amendments introduced to the new Municipality Council Law.

The improvements included wider powers for municipality councils such as having legal personality, financial and administrative independence, increase in the number of members, electing two thirds instead of half of the numbers i.e. increasing the number of elected members relative to the number of appointed members, women participation as candidates and electors, and reducing the legal age for election from 21 to 18. The powers granted recently to the municipality councils as per the new laws include also the power to examine the residential project plans and the limits of the municipality services, acquisition of land for public use, merging or demerging of municipalities, municipality fees and fines, the conditions and regulations of constructions, the laws of land utilizing, and all conditions and standards related to public health and establishing sub-municipalities and service offices.

1. Full election of the municipality council members: the appointment of a third of the members by the minister could address the issue of lack of competence of some of the members; however, there is a clear difference between the performance of the appointed members and the elected ones and that is because of the sense of responsibility felt by the elected members towards their electors and their communication and engagement with their affairs.

2. Setting the quota to ensure the membership of women in municipality councils: the participation of women as electors and candidates has been agreed in the next round; however, it might be difficult for women to secure seats in the council given the social reservations and lack of previous experience and practice. Also, given the fact that in the case of the Shoura Council women were give %20 of the quota it is logical to give women the same percentage in the municipality councils.

5. Merging of domestic and municipality councils: given the intersection between the responsibilities of these councils and the fact that they report to different administrative bodies and the lack of liaising frameworks between them: merging these councils will give them true power and enact their wider developmental role.

Author, Rights Activist, and Member of the Qatif Municipality