The Gulf and Muslim Brotherhood: Separation or Return 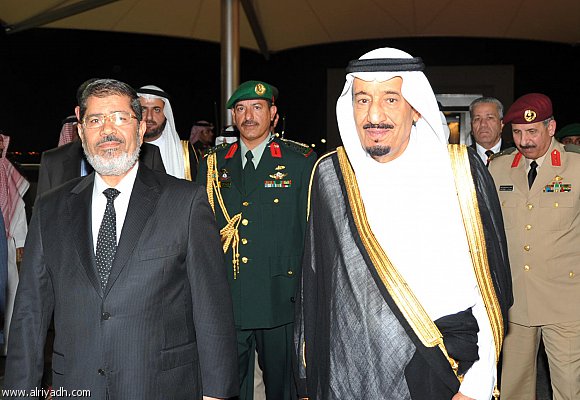 In the year 1945, 850 Muslim Brotherhood supporters in Alexandria gathered to welcome the arrival of Saudi Arabia’s founder King Abdul-Aziz Al Saud, from the train station to Ras el-Tin Palace. They were so happy and singing a praise poem written by their Azhari youth friend, Yusuf al-Qaradawi which described the Saudi King as an angel or a prophet who is visiting Egypt.

Time passed and in June 30, 2013 Saudi’s throne successors became the enemies of Hassan al-Banna’s followers. However, the dust of such Gulf storm rested to reveal that reconciliation between Muslim Brotherhood and the Gulf could be neither impossible nor possible.

From the first moment of the Arab Spring, Saudi Arabia helped its neighbours crush the revolutions. Therefore, it hosted Tunisia escaped dictator, tried to put pressure on America to support Mubarak and did its utmost effort in order to stop him from going to the court as shown by Wiki Leaks documents.

In February 5, 2011 Saudi Arabia’s Grand Mufti said that demonstrations and marches are plots set by “enemies of Islam” and warned young people against responding to misleading means of media.

Since then, Muslim Brotherhood, who was a part of the Egyptian revolution, joined the opposing camp of the Gulf. What is more, Muslim Brotherhood became a strong alley to Qatar, Saudi’s historic and main rival and the only Gulf country which supported the regional revolutions and the new governments that came out of them.

The Egyptian army intervention in July 3, 2013 played a major role in turning up the circumstances entirely and changing the political course in the region. This could explain the Gulf’s eagerness to support el-Sisi’s government in the first year by almost $ 20 billion and other symbolic incidents such as kissing the Saudi’s king on the head by el-Sisi and describe him as the “Arabs Leader”. Such incidents are unusual from a country like Egypt which considers itself as the “biggest sister”. Thus, Saudi’s oil has become in the eye of Muslim Brotherhood just as red as their blood.

It is not a One Gulf

Approaching the future of Muslim Brotherhood and the Gulf relationship requires breaking down the term ‘ Gulf’. By doing this, many differences will emerge.

Surprisingly, UAE It is known as the most radical opponent to Muslim Brotherhood. This attitude goes back to the eighties when the country witnessed Muslim Brotherhood almost full control of the ministry of education which includes designing the curriculums and selecting scholarships to study abroad. It is also a result of the UAE rulers’ ideological stand against political Islam in general.

On the other hand, Saudi Arabia’s main concern is the exportation of revolutions and not Muslim Brotherhood itself. Saudi Arabia is a big country with a population of 31 million people, two thirds are Saudis. It has also other issues that could spark anger such as poverty, unemployment, infrastructure and sectarian tension.

Bahrain acts as follower of the Saudi Arabia especially after the Saudi intervention to crack down the revolution in 2011. Kuwait’s stand, on the contrary, seems very quiet and maybe it is because of the Muslim Brotherhood’s influence within the parliament.

Oman is the most muted country in its fight against Muslim Brotherhood but it is the least influential member in the GCC. This is because the special relationship with Iran and not taking part in the war in both Yemen and Syria.

It is not a One Group

In June 2012, run-off presidential elections numbers showed the existence of Muslim Brotherhood in Saudi Arabia. Morsi won 90% of the votes with 74 thousand votes while Shafiq won only 7700 votes.

In 7 March, 2014, Saudi Arabia listed Muslim Brotherhood in its list of terrorist organizations and insisted on criminalizing those who support such groups physically or even by moral means.

Muslim Brotherhood took advantage of the Saudi’s pledges and did not make any action or publish strong official statements that could threaten the Saudi throne somehow. When some Muslim Brotherhood channels broadcasted el-Sisi’s video while despising Gulf Countries, other launched the hash tag “el-Sisi-despises-the-Gulf”. This tension seemed like an ongoing battle to win the heart of the Gulf.

The Wind of Geography flirts with the “General”

Egypt has always taken Syria as an example to warn of the consequences of unset in the neighbouring countries. However, this stand reduces the Gulf enthusiasm towards Egypt.

Iran, for the Gulf national security, is the very first enemy. Therefore, all Gulf countries agreed to support the opposition against al-Assad’s regime. On the other hand, el-Sisi stated clearly his support to al-Assad. This resulted in a hidden tension which appeared in the recent Arab summit when el-Sisi read a letter from the Russian President Putin and immediately received a tense reply by the Saudi Foreign Minister Saud al-Faisal.

In this September, Russia announced its military intervention in Syria. All Gulf countries condemned it but Egypt officially supported the Russian decision.

Yemen is another important issue associated with the Gulf National Security. Thus, Gulf launched its military coalition operation against Houthis. Despite showing their support for the move, no clear evidence of an Egyptian military operation was seen on the ground.

On the whole, Gulf priorities and even the regional situation have changed. Revolutions are no longer the main threat but Iran and ISIS which is “alive and spreading”. Accordingly, the Saudi’s plan is to establish a Sunni alliance that can stand against Shiite’s one. Muslim Brotherhood, despite all the exceptions, appears to be the ideal candidate because of its international extensions and its ideology that does not call for military options against “tyrants “as ISIS believes.

Is it possible that this tension comes to an end? In politics, all scenarios are possible depending on how far each side can go.

First of all, they should come to a belief that no dramatic changes will occur out of the blue. It is not a cinematic scene with a happy closure where the hero finds his path by a divine guidance just like when some Muslim Brotherhood expected a dramatic change in the Saudi’ approach after the death of King Abdullah. What is possible, however, are minor changes like the Saudi moving away a bit from the Egyptian regime. Gulf grants to Egypt were reduced while Muslim Brotherhood progressed regionally towards it. What is more, the return of Qatar to its Gulf sisters is guaranteed after their coordination in Yemen and Syria.

Secondly, the balance of powers must be taken into account. It is not logical, for instance, that Muslim Brotherhood in Egypt demands the return of Morsi as this it is nonnegotiable because they were defeated and have the lower.

Thirdly, establishing an appropriate framework, and not partial solutions, is the key to achieve a comprehensive regional settlement.

Gulf sees the Egyptian reconciliation of Mubarak’s government as the best form to adopt where state institutions and the national security files are all under the control of the army. At that time, Muslim Brotherhood were given the freedom to exist and to be limitedly represented in government departments while governed by the parliament.

In this June, Rachid Ghannouchi, the leader of the Tunisian Ennahda Party, paid a visit to Saudi Arabia in an attempt to pave the way for a reconciliation in Egypt. Ghannouchi told Algerian al-Khabar newspaper that there will be always an army, Muslim Brotherhood, Churches and other liberal powers and no one can change that fact.

Both media and politicians in Egypt got the Egyptian government’s message across as they emphasized the total rejection to any framework that does not include the termination of Muslim Brotherhood as well as the recognition of the new government.

If Muslim Brotherhood decides to return to the Gulf, they have to achieve a double compromise with the Egyptian government. This includes both the termination of the present Brotherhood group and the establishment of Islamic mission and charity groups with new leaderships and then creating parties by Muslim Brotherhood’s former members who are totally independent from the main group.

Muslim Brotherhood should also achieve further compromises with the Gulf which includes preventing their activities in the Gulf countries and to be an active member in the struggle against Iran and ISIS.

The gulf, on the other hand, should also accept the reality that it is impossible to demolish political Islam entirely. It should also use the economy card to persuade the Egyptian government to take certain actions that includes accepting the new Brotherhood form mentioned above, investigating into the killing of Brotherhood members and taking those involved to the court, resolving the political prisoners issue and working on a compensation programme to provide funding for the victims.

On the whole, no possible settlement is on the horizon as long as the concerned sides are unwilling to make concessions. What adds fuel to the fire is the presence of blood in the scene and the existence of certain figures whom considered as “untouchable” by each side. Once these sides are ready to step forward, we might witness a real settlement in the region.